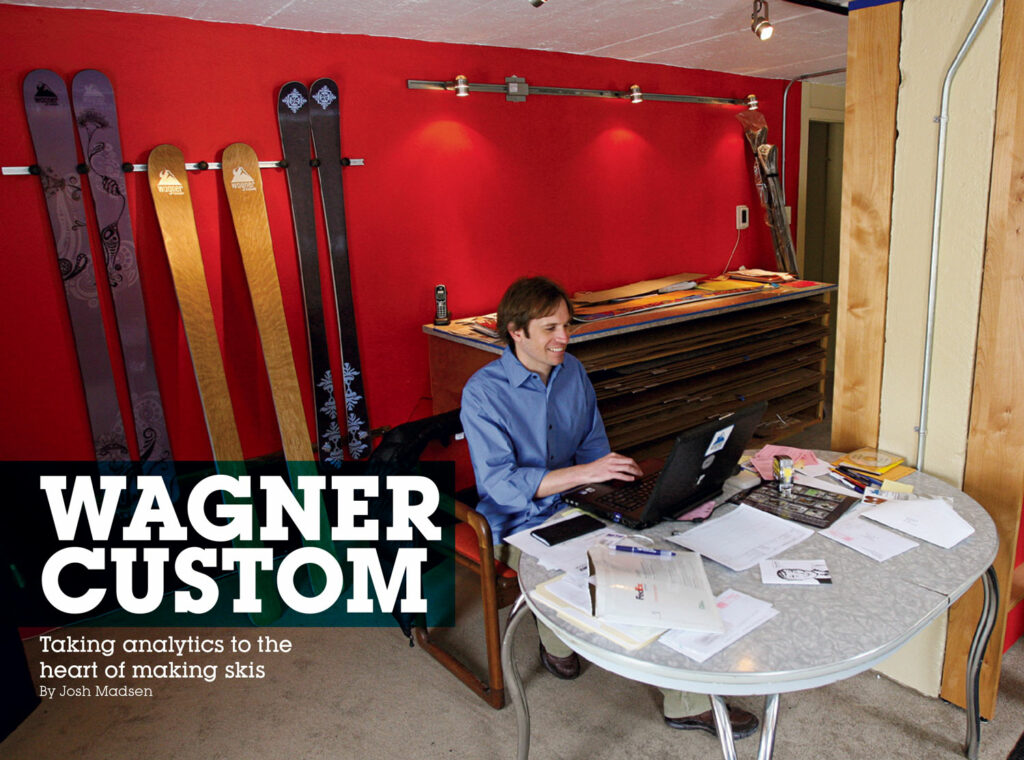 The old flaking stucco building in Placerville, CO, is far removed from city smog, raucous traffic and industrial parks. Its red star logo above the doorway was once the brand mark of the local gas station in the area.

A gurgle of the tiny rapids of San Miguel River across the street is one of the few sounds I can hear walking through the old snow to the front doorstep. Wagner Custom Skis is in the mountains, ten miles from Telluride, near snow and people who ski. It’s not in a vein of the ski world. It is in the heart.

I can see skis through the window. The door is unlocked so I walk into the small show room. It’s a noticeably casual atmosphere reminiscent of an old parlor. There is a doorway at the back of the room from which I can hear a radio playing. Through the opening are pieces of wood resembling ski shapes standing against the wall in various places along with floppy laminates of graphics and fiberglass stringers.

Pete Wagner warmly greets me as I continue my motion across a smooth concrete floor past the single ski press in the room. That’s the
only press they use here. We greet with a firm handshake and begin a tour of the two-room facility. Through another door, and I’m immediately
drawn to a large flat machine with two wooden ski shapes on it. There is also a second piece of machinery hovering above the planks and a computer on a small counter next to it all. The dusty computer screen is full of numbers. He tells me it’s a “numerical algorithm based on a personalized ski making formula.” It’s an interview converted into ski making motion he says. Cool. 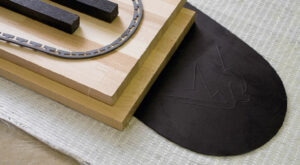 Wagner sets itself apart from other independent ski manufacturers by what Pete calls, “fitting people.” “We offer more than simply choosing a graphic or a stock model,” he says. “We give the individual a perfect fit.” First, he interviews his clients, both in person and by questionnaire. This process allows him to understand, first-hand, exactly what someone is looking for in terms of flex, weight, and terrain preference. This pragmatic approach delivers the answers that will become the algorithm, the numbers on the screen I just saw.

Pete tells me that he began his career in the engineering world of golf. “I created the software for design analysis of composite golf equipment.” It wasn’t until he decided to attend the MBA program at The University of Colorado, “as an academic exercise,” that he would take his love for skiing and apply his previous golf knowledge in the form of snow shredding sticks.

Wagner skis differ in price according to selection of materials and shape. But the high price tag, sometimes ranging over $1500, isn’t what necessarily defines the client. “We have people with money and we also have the ski bum type that saves all their money to have the ultimate ski,” Wagner says. 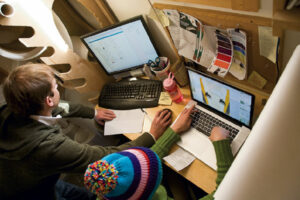 And Wagner Custom isn’t always making skis just for the die-hard ski fan. They made the retro skis for the movie Hot Tub Time Machine. A few samples of those retro skis were the ones I passed in the parlor upon entering the shop. Little did I know that the French sounding names were imaginary along with the logos on them. “The producers needed replicas of skis from 1986 – quite a few of them. And we made them all in ten days.”

It didn’t take me long to make a tour of such a small facility. It was difficult for me to digest what I was seeing—a glimpse of the future? It is hard to imagine that everyone will one day be on custom boards. But, it makes sense. I have a feeling that when ski bums start finding out more about Wagner Custom, Top Ramen sales will skyrocket in ski communities. Call it a hunch.

*This article originally appeared in TS #18