In his upcoming film, Future Freeheel, Ty Dayberry shares his thoughts on the current state of telemark and what pushes him to take the sport further. One of the most progressive telemark skiers to date, this will be a film you won’t want to miss.

If you are near the Tahoe area, the premier of Future Freeheel will be this Friday, November 17th at South Lake Brewing Company. It will be shown alongside The Bird Flu Crew, a movie from a friend of Dayberry’s. Doors open at 6:00pm, it’s free to all ages and 10% of beer sales and 100% of raffle prize money will be donated to the Sierra Avalanche Center.

Future Freeheel was brought to life by Ty Dayberry, camera man and editor Daniel Vega, and photographers/filmers Brian Walker and David Schue. This crew came together to bring Dayberry’s passion for telemark into the mainstream ski media. Dayberry’s main motivation for this film was to show people exactly why he has been telemarking for the past 20 years. “I want people to see there is a reason why there are so many people all over the world who love to freeheel,” Dayberry said. “There are so many ways to go about it and this film shows one way mainly from my perspective. I wanted to show what gets me inspired when it comes to telemark skiing.” 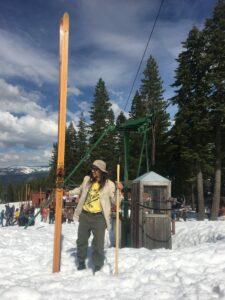 The title, Future Freeheel, suggests Dayberry has the future of the sport on his mind constantly. “The Future of Freeheel skiing is everything that the film is showcasing. It’s about pushing the sport with new tricks specific to telemark gear while having fun and not taking it too seriously; but at the same time, being serious about the skiing we do,” explained Dayberry.

The history of telemark has deep roots and has proved to stand the test of time. While the past is pertinent to the culture of telemark skiing, the sport is moving on and “it’s not going anywhere but forward. I just hope the film inspires younger tele skiers to get motivated to go out and start filming what they are doing. I want Future Freeheel to be sort of a catalyst for a new generation of tele skiers to go out and start recording what they are up to. That is where the future of our sport is going, thanks to social media.”

The film was mainly shot in the Lake Tahoe Basin, Sierra-at-Tahoe, and backcountry areas in and around the Basin. When asked where his favorite spot was out of all the places in the film, Dayberry said, “I can’t tell you exactly where my favorite place is but it overlooks the south end of Lake Tahoe, has the most playful terrain, and is rarely ever tracked out because not many other crews know where it is.”

There will also be a showing in Salt Lake City, Utah at Freeheel Life Telemark Ski Shop in February; details to be announced. You can check out the full film on any of Dayberry’s social media platforms and it will be available on Telemark Skier Magazine’s site after the premier.

Dayberry plans on skiing hard this winter, exploring even more of the backcountry terrain around his home. “I get the most excited for the pow-filled backcountry days and stacking quality shots; it’s limitless freedom. That’s what I want to accomplish with my life as a tele skier.” Be sure to keep an eye out for the next installment of Dayberry’s films next season.

Dayberry would like to thank his sponsors and supporters of the film: K2 skis, Guayaki Yerba Mate, Sierra-at-Tahoe, Freeheel Life, and Local Freshies.