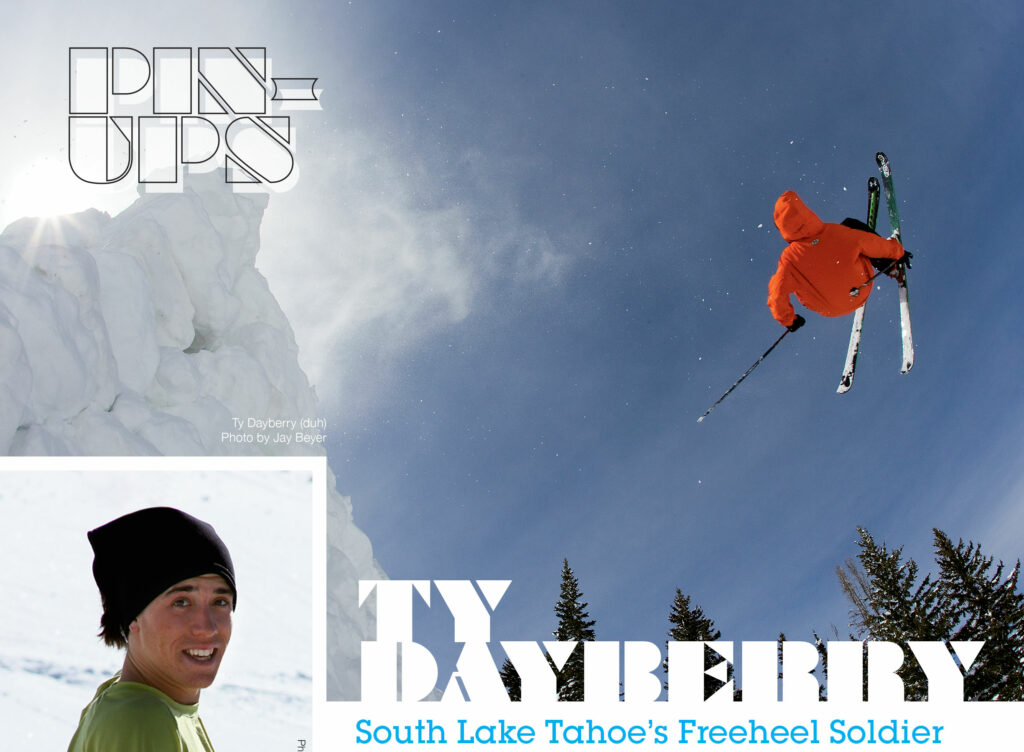 He’s been around long enough that when he picked up freeheel skiing at age 10 he wore leathers and used flip-flop cable bindings. As the equipment progressed, so did Ty Dayberry and for the better part of the last decade, Ty has been leading the forefront of the younger side of the telemark ski
scene.

For years he skied in the shadows of older greats like Max Mancini, Ben Dolenc and Lorenzo Worster, among others. In 2004 Ty was showcased as an up-and coming, albeit still young, telemark skier in Josh “Bones” Murphy’s final telemark ski film, Unparalleled 4: The Lost Season. In this film Ty’s talent was captured in it’s earliest form as he skied alongside Max, Ben, Lorenzo and other greats. Now 21, Ty is casting his own shadow over younger generations and has become a major influence on the design and construction of several K2 skis. Ty remarks that his relationship with K2 is perhaps the biggest accomplishment of his career and looks forward to continuing to work with Mike Hattrup et al at K2.

This past season Ty had the opportunity to travel to Utah—a trip he’s made many times—and log some footage with local-based freeheel skiers, filmers and producers, the Powderwhores. With this trip and footage under his belt he’ll have appeared on film with every major telemark ski production company to date: Toughguy Productions, Lipstick Films, Falling Forward Films, Unparalleled Productions and the Powderwhores. Ty will be the only telemark athlete to have worked with all five film companies to date. As an athlete on Heavenly’s High Roller team, Ty brings a sense of flavor and flare to the snow sports scene unlike we’ve ever seen from someone who’s skiing with half of a binding. In addition to other top finishes last year Ty ticked another top-podium finish at the 3rd Annual Buckle Up Big Air comp last March—held in memory of the late Sierra Freestyle Skier, Greg Smith.

Coming up in the 2009-10 season Ty will be taking part as a ski coach for Heavenly Ski Foundation’s Freeride Team. Though he knows that not many kids he’ll coach will be on freeheel gear, he’s psyched for the opportunity to show the younger ski population that you don’t have to have your heel locked down to throw down in the park and rip the entire mountain. Most importantly, though, Ty says his main role as a Freeride Team coach will be, “getting kids out on skis and having a fun time.” He’s psyched to pass his knowledge about skiing on down the ranks and his main goal is to see some of the groms on tele gear by the end of the season.

Ty’s passion for freeheel skiing—in all its incarnations—runs as deep as Mt. Everest is tall. Every day he’s either learning or teaching himself new tricks—something he works very hard at. Skiing is a lifetime-choice for Ty. It puts a grin across his face, keeps him up at night and allows him to express himself in the unique ways that one can only do with a binding that, to some, appears broken. Catch Ty in action in the upcoming Powderwhore flick “Flakes”
www.powderwhore.com

*This article originally appeared in TS#13