East Coast native and now West Coast dweller Tim Shepard has successfully begun a new chapter coaching for the Aspen Valley Ski Club (AVSC) Telemark Team. While much of Colorado is waiting for the snow to fall, Shepard and the kids have been charging hard, careful not to lose sight of what winter really means. Shepard and partner Bridget Gilroy were already on the hunt to move out west for the winter before Nick Cherney of AVSC offered Shepard a full time coaching job. “For the first time we decided to look at job opportunities before moving to the next cool ski town unemployed, homeless, and hoping things will fall into place,” Shepard said. And fall into place they did. Gilroy was taken on as the head coach of the AVSC U10 freestyle program with her impressive alpine background, breaking free from her ski instructing routine of the past. “We are hoping this will be a great recruiting ground for future tele skiers and hopefully next season we can bring Bridget on as a full time tele coach,” explained Shepard.

Before AVSC, Shepard spent a season coaching the freestyle team at his home mountain, Mad River Glen. His coaching and Gilroy’s instructing allowed them both to compete at the Freeheel Life Cup competition in Grand Targhee last season. While Shepard has plans to compete in both Breckenridge and Targhee alongside his athletes, Gilroy’s position with the U10’s will keep her in Aspen on the weekends. Shepard’s stoke level continues to stay 10 out of 10 with the concept of coaching and competing at the two events this season. “Obviously the kids take priority at all comps but I am hoping to be able to put in some comp runs and show the kids that ‘coach’ can still ski,” he laughs.

The members of the AVSC tele team have some ambitious but achievable goals driving them this season. While some kids have been tele skiing for years, others are experiencing their first season on the team and their goals range from staying on their feet at all comps to landing backflips or 360’s. For those not competing, it might be six Highland Bowl laps in a day or switch tele skiing a certain trail top to bottom. “We like to see kids set goals in all aspects of the sport because the goal of the program is to produce well-rounded, beautiful telemark skiers, not just athletes who can win comps,” said Shepard. There are currently 13 kids on the team, ranging from 9 to 15 years old. There are two groups, one meeting three days a week and keeping their focus competition based, while the other group skis with Shepard and Cherney once a week. For Shepard, the coaches he had growing up were his role models and he hopes to be in the position where his athletes look to him for inspiration and guidance as he did to his coaches.

“We are both so stoked and humbled to have the opportunity to be a part of such a great ski club and community,” said Shepard. “Also getting the chance to learn the terrain at four different mountains, along with some of the most extensive backcountry terrain we have ever seen, is super exciting.” 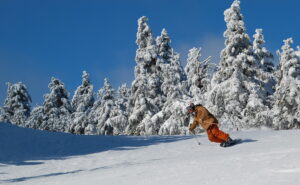 To learn more about the AVSC Telemark Team, click here.