The common theme among aficionados of burly tele boots is their lack of sensitivity. Not the skiers, the boots. As a powder pig sensitivity is a boot quality I revel in, but I’m no tele charger. Not by burly boot standards. However, that lack of sensitivity is really only an indication that boots like Scarpa’s TX-Comp were not meant to be skied at speeds where the forces driven and received between your legs, boots, and skis require sensitivity. If you routinely hammer the bumps, enjoy air, crush crud for breakfast, and spit in disdain at slush, these boots were built to navigate your path with power. In powder it just means you can go a lot faster and still maintain control because the boot won’t waffle in terrain or at speeds that make boots like the T2 or TX melt.

Made for Turnin’, not Earnin’

As good as the TX-Comp is at slaying snow snakes, they were not made for much walkin’ — some, but not much. There is a small bit of rear flexibility to the cuff but it is among the least possible in the Scarpa family. The overall stiffness of the cuff when locked contributes to a movement with significantly more resistance than the TX-Pro. While on the heavy end of tele boots, it is lighter than the defunct T-Race. Thus, while the Comp does have a walk mode, many of its advocates consider the loss of rigidity caused by it to compromise the purpose of the boot — which is to kick ass and take names later while riding gravity’s pull. For those who insist on eliminating all slop, substituting a spine without a walk mode makes a good afternoon project (parts extra). Backcountry types will want the walk mode; it may not be record setting, but you’ll appreciate it.

One thing a lot of people are wondering about is if Scarpa will offer tech inserts in their 2018 model. I tested the boot myself with the insert and know a few strong skiers who have a number of days on with no problems. On the record Scarpa says they will not provide that feature on the TX-Comp. Although I’m confident the inserts would be strong enough for the majority of skiers, the percentage who are likely to go far beyond in the forces they apply to their boots, and thus the inserts, will no doubt prove Scarpa’s fear of damage. The liability that would result, either for injury or warranty costs is too high to risk offering them. For inquiring minds, TX-Comps with inserts ski great with the Meidjo (stiff springs recommended) or TTS. Yes, you may be disappointed that Scarpa doesn’t plan to offer the Comp with inserts next season. That could change.

All of Scarpa’s TX family of tele boots have a relatively soft flexing bellows. Each is progressively stiffer, with the TX-Comp being the stiffest. What distinguishes the Comp isn’t the stiffness of the bellows, but the stiffness of the cuff. The result is a flex that is excessively cuff driven. Everyone adapts to it, but many wish the balance of flex resistance between the cuff and bellows were more even — meaning a stiffer bellows.

It’s a Scarpa. It has a great shape at the heel to help hold it down, plus their trademark instep buckle to pull your heel firmly back into the pocket. The toe box is 102mm wide, the same as the TX-Pro. It fits a lot of feet out of the box, but all lasts have limits. The stock liner is tongued and reinforced with different densities to magnify the stiffness around your cuff. Unlike the Pro version, it does not have a soft patch on the back for walking mobility, maintaining stiffness for the sake of the turn instead.

The buckles are solid, not fancy. The instep buckle is a wire clip that is easy to put on, but difficult to get off. YMMV, but it is undeniably more fiddly to release than the plastic toothed buckle that it was upgraded from. A dedicated women’s version is not made, but they are available in small sizes (down to mondo 22.5).

This boot is made for a take no prisoners attitude on the slopes with more time spent turning than earning. 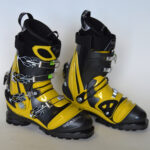