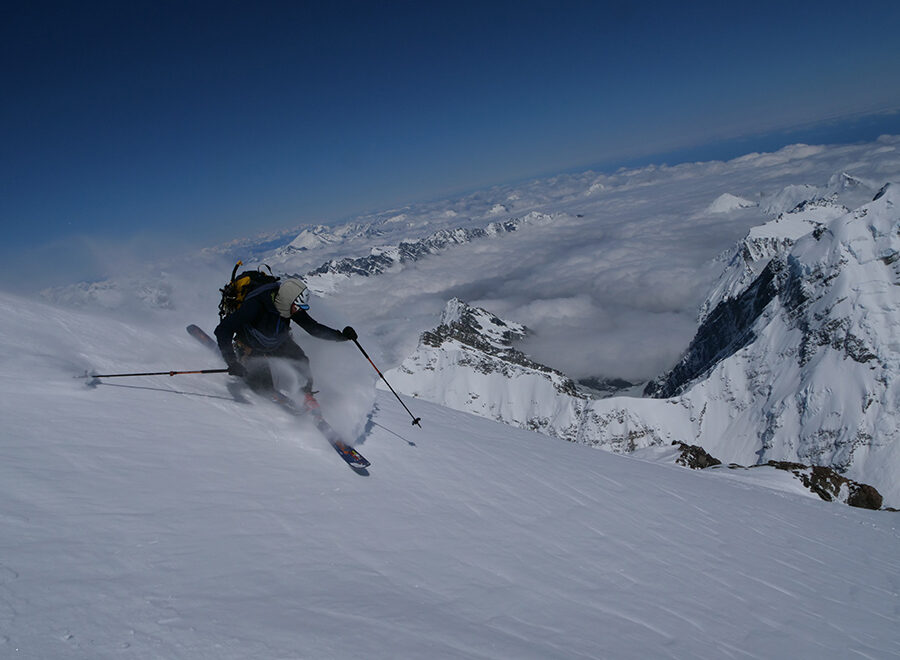 Mountain guide, ski guide, avalanche educator, ski patroller; there isn’t anything Ty Guarino can’t do. Born and raised in the small town of Lee on the coast of New Hampshire, skiing wasn’t always close by. Guarino’s first turns were at the age of three despite Gunstock Mountain Resort being an hour away. Guarino’s parents were avid skiers themselves and made sure to get him on skis as much as possible at ski areas like Gunstock, Sunapee, Attitash, Wildcat, and Loon; most of which were over 40 minutes away. His backcountry skills then developed in the White Mountains while he was in high school.

At 16, Guarino discovered telemark. “In 2006 some friends and I had learned to telemark ski at a North American Telemark Organization (NATO) festival at Bretton Woods ski area,” he explained. “The entire ensemble of the hippie image and a new form of skiing struck a chord with each of us so we all got full setups the following year.” Guarino also credits his high school social studies teacher, Dave Hawley, for the switch. “Dave had spent a solid ski-bum stint in Taos, NM, as a freeheeler in the late 1990’s and inspired a lot of my friends and me to get excited about exploring the mountains through backcountry skiing.” Following the hippie image, Guarino pieced together his first setup which included a pair of Scarpa bumble bee T1’s for $200 and a $10 pair of Riva 2’s he mounted on lime green Volkl Zebras he got for free on the side of the road. “Throw in a pair of $20 climbing skins from the Army surplus store, and I was out exploring the NH backcountry for a buy in price of $230. I suspect if you were looking for the same experience now, you could get a similar setup for about $45,” he joked.

With his sights set on being a fully certified IFMGA mountain guide, Guarino has spent the past few years working towards certifications and experience. “The stepping stones to get there have been the ultimate mix; part-time patrolling at Big Sky Resort, ski guiding and avalanche education for Montana Alpine Guides (MAG) during the winter, then two months in Alaska as a big mountain guide on Denali in the spring,” said Guarino. “It’s pretty easy to do a personal ski expedition during my yearly Alaska pilgrimage, so I try to get a plane drop somewhere for one to three weeks to keep things interesting.” Summers bring him back to Montana and Wyoming, rock and alpine guiding. In the fall, Guarino treks south to Joshua Tree, California, to work an Outward Bound semester.

The summer of 2018 looked a bit different than what Guarino was used to. Endless winter called in the southern hemisphere and he kept the season rolling, patrolling at Porter’s ski area in New Zealand. Guarino spent four months there and surfed on his days off. “New Zealand is likely my favorite place I have ever been to and I hope to live there for another stint further down the road,” he said. Before returning stateside, he took the time to ski the south peak of Aoraki, also known as Mt. Cook. Beau Fredlund, a Montana friend, happened to be in the area and their schedules aligned. “We had never actually skied together before but had this amazing opportunity to ski a seldom-visited valley on the west side of the mountains because of favorable conditions,” Guarino recounted. “The southwest ridge and couloir were traditionally mountaineering routes but have been adopted as ski lines in the modern age. We were likely the sixth descent party and I think I was the first freeheeler.”

While Guarino doesn’t have any big trips set in stone for the winter, a friend has been bugging him about a Norway endeavor this coming spring. “I’ve spent a lot of personal time skiing in Alaska and wouldn’t mind switching it up to try something new.” Side trips within the continent are always feasible for Guarino though; he travels down to Jackson, Wyoming, as much as possible and skis Bridger Bowl outside Bozeman on his days off from patrolling. One of his most memorable days from the Jackson area was when he skied the Spooky Face on Nez Perce in the Tetons. “It’s another seldom visited ski line you look at every time you walk up Garnet Canyon. Even now when I look at it, it still seems like a visionary line. I have a huge amount of respect for the first descent party that skied in it 1997 on really crappy gear and straight skis.”

Guarino credits his work as a ski guide for cementing his stoke and ambition for telemark skiing. “I feel like a lot of the guiding industry takes themselves too seriously and it is easy to get caught up in the arrogance associated with it,” he says. “The bottom line for me is I have found a meaningful way to make a living on my skis, and I just happen to be passionate about telemark skiing. I don’t necessarily want my career to shape my passion, therefore, I guide on my telemark skis. During AMGA courses, or even when I work or ski with other guides, they usually give me the stink eye when they see my freeheel setup.  It only takes a run or two for them to see 150-200 days a season means it doesn’t make a difference what gear you are on.”

When he hears ‘telemark skiing is dead,’ Guarino says it always makes him laugh. Part of him feels like it is true but he says the people who say it should believe it. In his mind, telemark skiing is needed now more than ever. He’s convinced it will have a renaissance like the 1970’s and 90’s because it’s not just a great way to access the backcountry, it’s also a great way to keep your body young and fit. “Three pins and free-bin skis were good enough for a lot of my generation learning how to backcountry ski, why can’t it be for another generation? Fifty dollars and a sense of adventure can go a much longer way than $995, which is probably what a brand new low level Alpine touring setup costs,” Guarino said. “I swear my feet are happier, my knees feel looser, and my back feels better because I choose to telemark ski.  If I skied 200 days a year on alpine gear, my joints would all rattle out of their sockets!”

Guarino’s set up: Resort: Bindings: 22 Designs Outlaw X
Boots: Scarpa TX Comp
Skis: “Heavy full metal 115 underfoot from my ex-racer girlfriend” or a variety of Voile
Backcountry: Bindings: variety of 75mm
Skis: Voilé 178 SuperCharger
Boots: Scarpa T-Race (R.I.P.)
“I feel like I have the largest amount of steep skiing control and familiarity with the binding/boot flex of the duckbill interface. Therefore I am still a telemark crossbreed between NTN and 75mm. Unlike some people, I like a SUPER soft binding when I’m skiing powder or steep terrain, and NTN just doesn’t seem to get soft enough. With the new Lynx coming out though, it might not be long before I am totally NTN’d out, hard to say…”

And at the end of it all, “You must remember: skiing is fun.”

For anyone thinking about a career path like Ty Guarino, he has these words of wisdom for you.
“I just want to encourage anyone contemplating either guiding or ski patrolling to pursue it with everything they have.  Both careers are challenging to piece together full-time year-round work, but it is possible. You have to be willing to really put yourself out there, and you have to be willing to sacrifice a lot of the creature comforts some of your friends might have.  I was incredibly lucky to work for Outward Bound when I was 21. It built a solid foundation for me to both work with people and work as a guide. Both jobs have allowed me to travel all over the world while getting paid. Even though I sometimes get frustrated with some of the sacrifices I have had to make, it has been an incredible journey.”