Serial Heelers is a series of telemark ski films from France directed by Yves Thollon and featuring three ripping tele skiers: Aymeric Cloërec, Bertrand Clair, and Seb Mayer. With big mountain lines and huge airs, the team shreds their home town turn in Chamonix, France. The latest episode, “Back to the Roots,” brings a different story to the table; the tracing the historical roots of telemark where it all began   Norway.

It all started five years ago when Pierre Mouyade, owner of The M Equipment, reached out to Thollon to create a web series about Seb Mayer and Aymeric Cloërec, athletes who do the telemark dance enviably well.

“I was already working on a project with Aymeric when Pierre called me,” Thollon explained. “I barely knew anything about the sport, but I love discovering new things. Telemark had always looked aesthetically pleasing so I was stoked to work on this project.”

Thollon grew up in the French Alps, in Staint-Jean-de-Maurienne. He started skiing at the age of three in Les Sybelles. When snowboarding took off he was 13 and he followed his friends to the wide side. With a degree in chemistry he worked in a pharmaceutical lab while dreams of being a videographer were on the back burner. After a few years he gave up on his chemistry profession and started making ski videos with countless freeriders. He now lives in Haute Savoie, near Chamonix and continues to ski and snowboard.

Serial Heelers started with Seb Mayer and Aymeric Cloërec. Bertrand Clair joined the second season and new riders are featured in each episode. Mayer has been skiing four decades, starting at two in the southern Alps of France. In 2000 Mayer discoverd telemark at Val d’Isere. Lured by the Along with a few other friends they learned a new technique, but what they found was the true spirit of telemark. Mayer still goes skiing with a lot of his telemark friends and they have a WhatsApp group dedicated to skiing with telemarkers.

Cloërec hails from the small resort Les 7 Laux, where he began skiing at age three. In 1997 his Dad, an active member of the Black Shoes crew, introduced him to the turn.

“The balance game is amazing and I really like to push myself physically,” Cloërec says, adding, “Each telemark is so fun. I feel like I’m always improving and it’s interesting to think that I haven’t even touched the limits of this sport yet.” Cloërec locks his heel from time to time, but insists that it only helps his tele technique because it reminds him he can always try to telemark as fast as he alpine skis.

Clair grew up in a small town close to Bourg-Saint-Maurice. Like the others, he started skiing at age two at Les Arc. Clair found telemark after talking with Georges Canard Baetz at a Black Shoes festival. Now he lives in Sainte-Foy-Tarentaise. “I love to telemark there, the resort is so small and peaceful,” Clair says.

The goal of Serial Heelers was to showcase the sport of telemark skiing with a proven formula — great skiers ripping big lines in majestic mountains. Big mountain skiing and backcountry is the focus of the series.

“It isn’t [filmed] just for telemarkers,” Thollon said, “Everyday I learn more and more about telemark and I hope the viewers do, too.”

The first season videos were relatively short. Thollon wanted to start out with big lines and breathtaking views to get people hooked. The storytelling would come later. The objective for Serial Heeler’s third season is to work towards a short movie.

“We love to involve other telemarkers, like Peter Steltzner from Rabbit on the Roof skis, Norihide Yamagushi, who guides in Japan, or Ariella Mariani and Giuliano Pederiva in Italy. When we film on location where our fellow telemarkers live, we have to meet up and ski,” Thollon explains. “That’s the cool thing about telemark culture. I’m always surprised how everyone knows each other. When we’re in a new country filming, we end up meeting someone who knows a friend or a friend of a friend.”

“I will always remember one crazy day of shooting in the Dolomites of Italy. It was my first time there and I’ve never ridden such a long couloir in my life. We took half the day just to shoot this couloir from the inside. There was 50cm of powder and we never saw another soul,” Thollon recalls when asked about his biggest accomplishment through telemark skiing. Cloërec says, “Five years ago we began to shoot videos with Serial Heelers. We’ve been all over, places like Austria, Japan…last year we went to Norway for our latest movie ‘Back to the Roots.’ It was exciting to go back to the roots of our sport. I will never forget ending our line 2 meters from the sea. It was such a unique experience!”

Over the past five seasons, Serial Heelers has gained a following. Thollon humbly admits he’s not sure if the series influences the sport of telemark skiing.

“What I do know is that since the beginning of this project we’ve had a lot of fun producing these videos. I hope that people who follow us have fun watching it.”

When people rib him about telemark being dead Thollon laughs. “It will never die.”

Yves: “I will not tell my set up, all telemarkers will kill me.”

(“I remember my first set up, an old pair of skis with 3 pins bindings and leather boots!”) 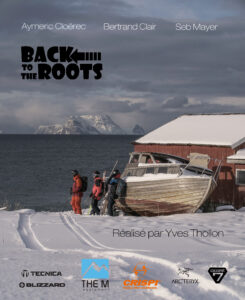