Telemark has become a community. It used to describe a sport, define a skier and set them apart from their skiing peers. But these days telemarkers are more concerned about passing on the art and love of the sport to the next generation. And that next generation continues to grow thanks to people like Judith Gibert. Born and raised in Alp, a small town in the Northern Pyrenees Mountains of Spain, she learned to ski at two years old. From there, winters at her home hill of La Molina fostered her growth as a skier and ski racer. After 14 years of ski racing Gibert realized she wanted to make a career of the sport. Instead of setting her sights on becoming a professional ski racer, she focused her efforts outward and began learning how to teach others the sport that taught her so much.

While living in Las Leñas, Argentina, during the winter of 2007, Gibert landed her first job ski instructing and quickly realized that not only was it a great job, but it was also a way to pass on her passion for the sport. From Argentina she followed winter back to Europe, this time in Austria. So far she’s spent five seasons in Montafon, Austria, four in Valle Nevado, Chile, one in Niseko, Japan, and one in The Remarkables, New Zealand.

During the winter of 2013 Gibert bought a pair of telemark skis and bindings, and would share a pair of boots with a friend; they would each take two runs on the gear and then switch out, that is, until Gibert decided she should just buy a pair for herself. With a little help from her mentor Lena Attoressi, Gibert quickly figured out telemarking in the backcountry was more interesting than alpine and she spent most of her free time that season searching for the perfect turn. The season she spent in New Zealand was also the season she took a course to be a telemark instructor; this was the first time she had professional instruction on ‘how to telemark.’ This course, in addition to the variable terrain The Remarkables had to offer, made her a stronger and more competent telemark skier. 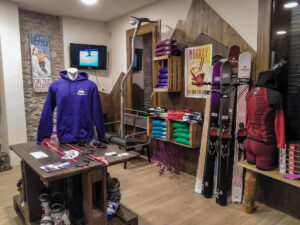 In 2016 Gibert returned to La Molina to start a project of her own, one geared towards sharing her passion of telemark skiing. She created FreeHeel Pyrenees, a telemark school that is exclusively dedicated to the instruction, history, and art of telemark. The school also has a kids’ program and a new storefront located in Alp. The shop provides all things telemark from boots to apparel to books and posters. This season Gibert has developed a competitive junior team, who have already raced in Hintertux, with the ultimate goal of competing in the Junior World Cup in Kravec, Slovenia this February. In addition to the race team, Gibert is working on bringing the Level 1 Telemark Instructor course, taught by the Norwegian Federation, to La Molina. By hosting this course she hopes to create new telemark instructors throughout Spain who would be recognized by the International Ski Instructors Association (ISIA) for their qualifications.

Stay up to date with all things Free Heel Pyrenees here.
Instagram: @free_heel_pyrenees