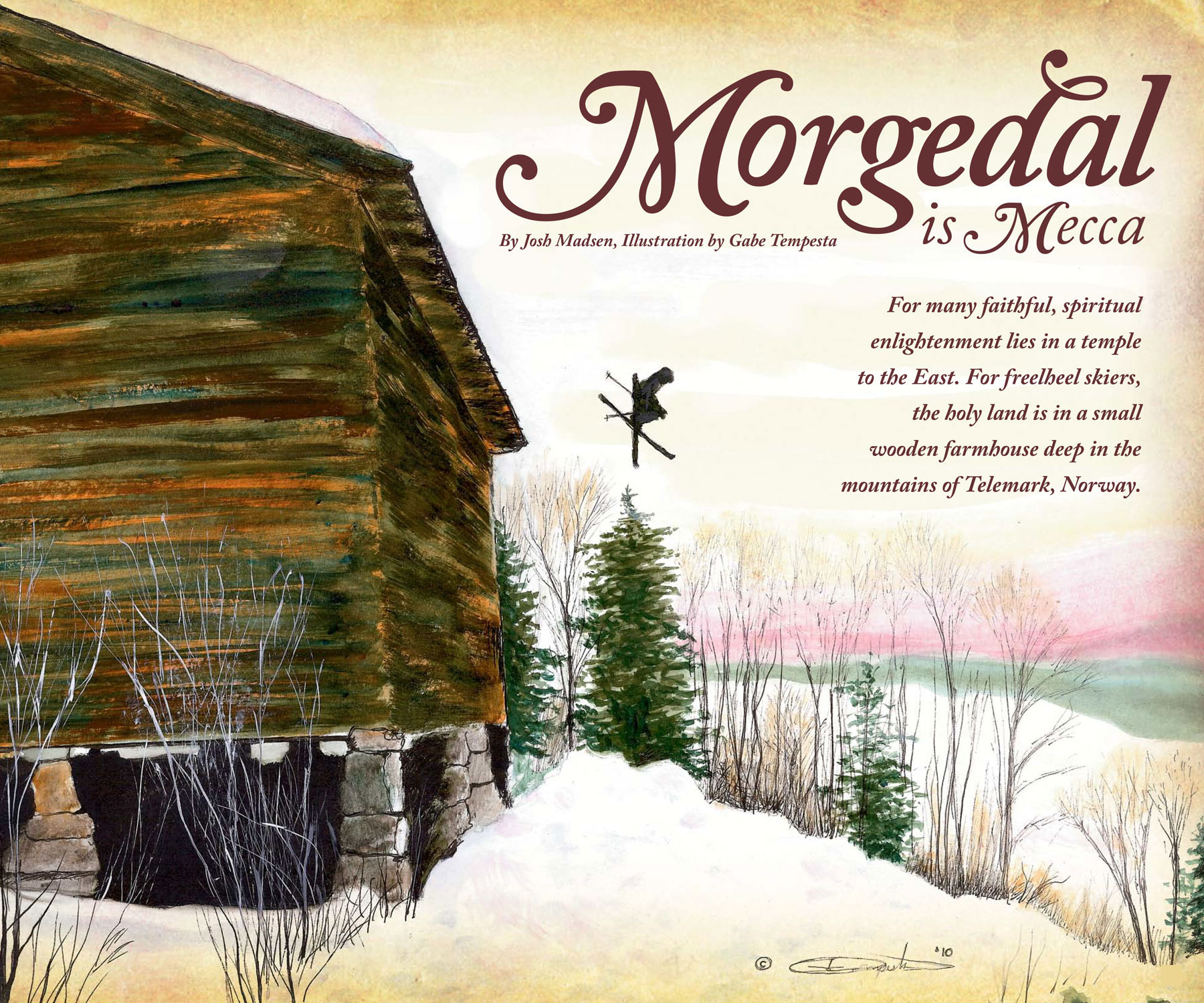 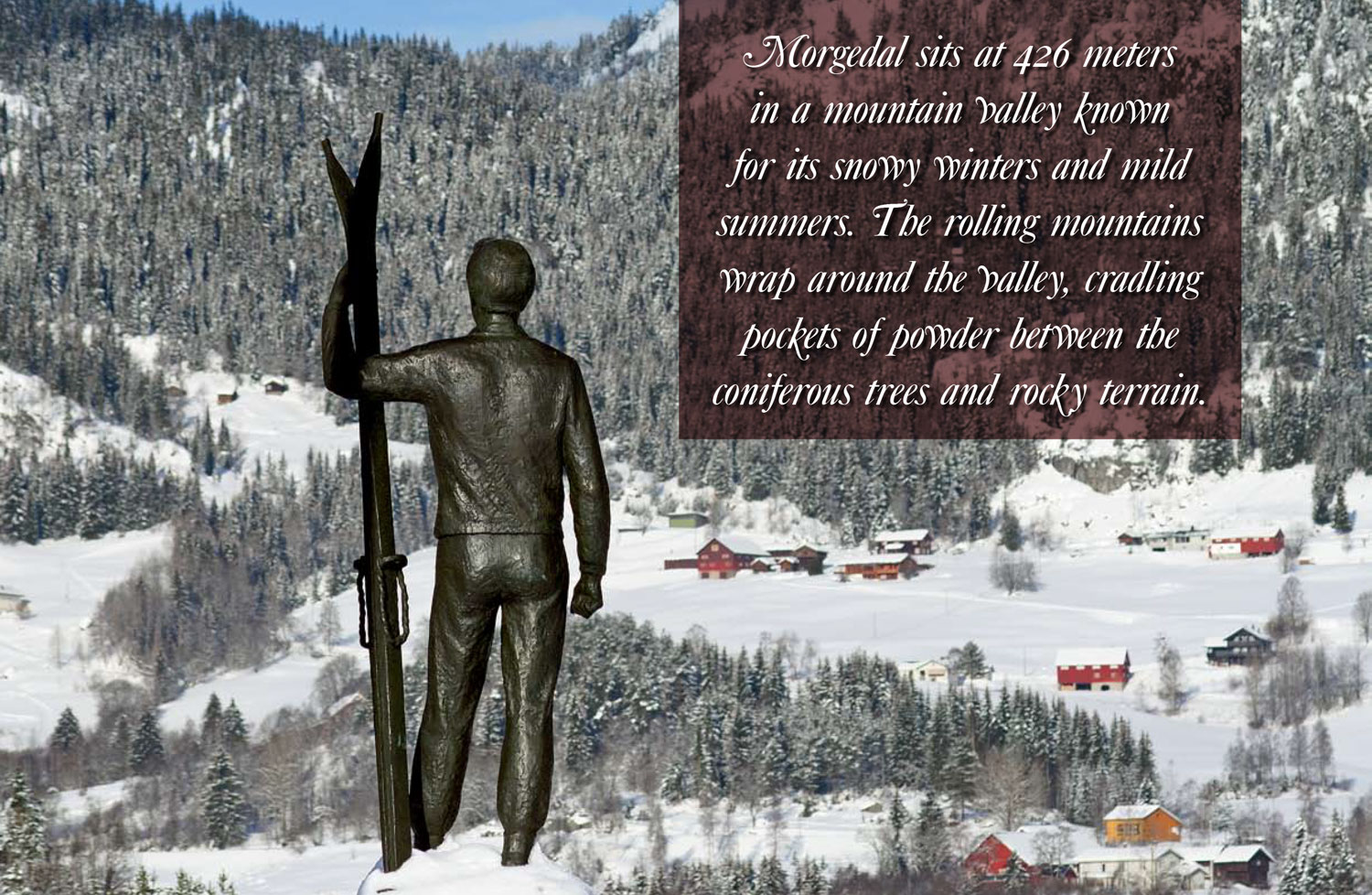 “M-O-R-G-E-D-A-L,” I repeat as if I were teaching a young child a new word. The Norwegian girl behind the ticket window looks perplexed. It isn’t that I’m pronouncing the name wrong; she simply doesn’t know where Morgedal is. I try not to show any signs of distress, but in all honesty there’s a moment of panic.

I wait and watch her collaborate with the other clerks. Eventually they are able to locate the small village on the map. Relieved that I finally have a ticket, I make my way to the loading zone to begin my journey to the Land of Telemark. My friend Richard, from Munich, is waiting for me and we begin to load our gear into the bus’s undercarriage.

Our bus lumbers out at dusk and winds through the countryside, passing small towns, lone farms, and open fields dotted by dark lakes. Route E134 retraces the route of Morgedal’s most famous resident, Sondre Norheim, and two other men as they traveled to Christiania, now Oslo, in 1868 to participate in the first National Skiing Competition. Sondre, at 42 years old, crushed the competition by demonstrating his incredible ability to jump and turn, something many people had never seen before. This was largely due to his innovation of the first shaped skis and use of a heel binder, both created first in his hometown. His winnings were 10 spesidalar, the equivalent of less than 7 dollars today. What took Sondre half a week takes us only three hours.

MORGEDAL
Nearly 200 kilometers southwest of Oslo, we arrive in the West Telemark region of Norway. It’s nearly 3 a.m. by the time we reach our hilltop hotel. The fresh snow and sharp stars twinkle together in the absence of moonlight. As I look into the star lit hills it’s hard to imagine that my home in Salt Lake City ever existed at all.

Morgedal sits at 426 meters in a mountain valley known for its snowy winters and mild summers. The rolling mountains wrap around the valley, cradling pockets of powder between the coniferous trees and rocky terrain. Although modern day amenities are available, you come to this type of place because of the things that haven’t changed.

The Morgedal Hotel is warm and inviting. Richard and I are expecting a rustic lodge, but are instead met with walls full of paintings and chic decorations. As we make our way to the front desk, Richard turns to me and, beaming, announces: “We made it!”

SONDRE NORHEIM
Locals remember Sondre as someone who couldn’t sit for long and was always anxious to finish his work and go find some fun. His passion for snow and for pushing the limits with his skis and bindings still lives on in the modern ski bum. Sondre was determined to be a well-rounded skier in jumping and turning. These are still the two key elements that local telemark skiers abide by. Many young freeheelers spend their weekends building jumps in the local hills to practice both the new and old styles of catching air.

Sondre’s lasting presence in Morgedal is undeniable. A statue of Sondre, with a pair of skis in one hand and his gaze set toward the end of the valley, stands guard over the center of the town. These are the hills he spent his days perusing for more turns. Not far from this statue is the Olympic flame that continues to burn as a reminder of where the flame began for the 1952, 1960, and 1994 Olympic Winter Games.

ØVERBO
In spite of being road-ragged, my anticipation of exploring the hills of Morgedal makes sleeping a chore. Questions about the origin of this sport, my sport, have bubbled up like a spring for almost two decades, and now it is time to fill the canteen—besides there is obviously something in the water around here. Not only has Morgedal produced guys like Sondre, but also people like Olav Bjaaland who was a champion skier and key member of the first expedition to ever reach the South Pole.

The bright light of a bluebird day breaks through my curtains early—plenty of sunlight at this latitude this late in the ski season. Energized by daylight, I set off to go explore my surroundings.

At the end of the valley lies Øverbo, the farm where Sondre was born. This is the first place I want to visit. From the Morgedal Hotel it is only a twenty-minute walk from the main village road, and a short skin or hike up. At the trailhead, several keys hang next to a donation box that reads, “Your donation supports the Morgedal Club (Formed in 1887—one of Norway’s most famous clubs).” I drop ten Norwegian kroner in the box and begin my approach toward a place I’ve dreamt of seeing and skiing.

The simplicity of the process is paramount. There is no need for a guide. It’s reminiscent of making my first telemark turns; really not knowing what comes next. The hike is relatively short and easy, only taking twenty minutes from the key pick-up. I pass several traditional houses still standing in near perfect form on the hillside. They are a reminder that people have inhabited this place for over eight hundred years.

I eventually make my way through the forest and into a small open space where three buildings stand. The smallest of the three is the house where Sondre was born. I can almost imagine his skis propped against the wall near the door with the boots still left in the bindings. Leaving your boots in your bindings overnight was common in Sondre’s time. It would allow your boots to freeze so that you would have better lateral stability for making turns in the morning. Now that is true commitment to making your gear work to the best of its ability.

My imagination continues to wander as the spring snow compacts under my feet. I take my skis off and unlock the door. Imagine a Back To The Future moment, as if someone strapped a FluxCapacitor to your skis and sent you back 150 years.

Everything looks just as it did a century and a half ago. Sondre’s original skis mounted on the wall, the fireplace still black with soot, and a small table to sit at. I look out the window down to the valley below. The view hasn’t changed much since the mid- 1800s. There are endless options for skiing, from rock pillows to powder in the trees.

Sitting on the small table is a large book full of signatures, thank you notes, and sentimental letters to Sondre. I scan through them, interested to see how far people have come. Japan, Austria, Germany, Czech Republic…and then I come across a familiar one from Eugene, OR. My friend Jarl has left his signature from his own personal pilgrimage last year.

I leave Sondre’s house, energized by the thought of seeing, feeling, and hearing what this place is about. Telemark skiing didn’t grow out of some rich man’s desire to create something new. It grew organically out of a place where people were humble and interested in enjoying their surroundings full of snow and beautiful terrain.

After locking up the house, I click into my fancy modern-day tele bindings in preparation to make my way back to the hotel. I laugh at myself for a second as I think about how well Sondre and his friends must have skied these hills in their frozen boots on wooden skis with woven bindings made of birch tree roots.

THE MORGEDAL GAMES
Each year, locals—from five-year-old rippers to teenage jibbers to old-school jumpers—come together for the Morgedal Games. It’s one of the largest local winter events in the area, and it brings the community together to compete and watch each other in traditional ski jumping, big air jumping, and even a telecross event.

I meet up with Richard at the hotel. He’s befriended some other freeheelers while I was at Øverbo. We all decide to take the short drive from the hotel to the old farm of Svein Sollid, who at one point held the world record for ski jumping.

Sollid’s farm is the perfect place in both spirit and pitch for the opening ceremonies and the events: a torch lighting ceremony; the Ølbolleren, an obstacle course you do while carrying a bowl of beer; and, of course, jumping.

Jumping is as important to these freeheel skiers as turning and style, all of which are still rooted deeply in the people of Telemark. Sondre demonstrated his mastery at local competitions like this one hundred and fifty years ago. In fact, fifteen kilometers from Morgedal in Ofte, Sondre took first place in what is thought to be the world’s first ski jumping competition. That was in 1866.

Our group makes the approach up the hill to the venue. Fragrant smoke from fire pits at the base of the slope hangs in the crisp air. Men and boys are jumping on traditional wooden skis and landing in the telemark style as the crowd cheers them on. I sit and watch them for a while until something catches my eye on the right side of the slope.

My new friend Hamish is walking toward me. He is grinning ear to ear and in his hands he is holding a helmet and a competitor’s bib. “You realize that the winners of a skiing contest get to spend the night dancing with the most beautiful girls in the valley, right?” he asks. I politely try to get out of having to hurl myself off the massive wedge below me, but my excuses melt away as quickly as they fall out of my mouth. Not five minutes later I’m at the start zone among all the best youngsters from Telemark. I’m a terrible dancer, but suddenly the winning spot seems worth a shot.

After my second jump, a teenage boy comes up to me and issues a challenge: a Switch 540—a trick that begins by taking off the jump backwards, rotating 540 degrees, and then landing forward on the transition below. I look at him and laugh a little thinking he’s joking. I’m wrong. He is completely serious and I decide that if I came all the way over from America, I should at least try to offer up something special.

As I leave the lip of the jump, everything seems to go silent around me. In the darkness, my eyes grasp at flashes of light coming from the hills. My right hand reaches the sharp edge below my boot in a safety grab and in a quick flash I come around to see the steep transition of the other side of the jump. I touch down. The snow is firm and fast as I skid to the bottom unscathed.

For once my skiing skills pay off beyond the face shots. I end up taking first place in the Big Air contest due to that Switch 540. Within an hour I find myself out on the dance floor at the local community center to celebrate the closing of the 2010 Morgedal Games. I stand there alone while my friend Hamish chooses a girl from the valley to be my partner for the first dance. A beautiful blonde woman gets up from her seat and approaches me on the dance floor. The traditional Norwegian band counts in the song and the night of dancing begins.

Sondre had everything at his fingertips here in Morgedal: access to endless mountains, a place to imagine what was possible on snow and friends that enjoyed making turns. He, too, must have danced with his fair share of beautiful women after a long hard day on the hill. But no skier, now or ever, will leave tracks as important as his.

*This article originally appeared in TS#15