Midwest Telefest – The Coolest Thing I Have Ever Seen

It was the only light on we’d seen for miles. The fact it was a neon beer sign told me there was a good chance they’d still be open. The only thing open this late with a sign like that had to be a local tavern and hopefully someone in there could tell us where Mount Bohemia was.

Photographer Joey Wallis and I had long ago decided we wanted to do some ski photography projects in the Midwest of America where both he and I had grown up. I found an obscure festival in the Upper Peninsula (U.P.) of Michigan called Midwest Telefest and I knew I had the perfect mission for Joey and me to start exploring what kind of Midwestern gems we could find.

As Joey and I entered the quiet, nearly empty tavern, we approached the young woman behind the bar and asked where Mount Bohemia was. Before she could answer, the only two people in the bar, a man and a woman seated down at the end, piped up and asked rather enthusiastically, “You here for Telefest?” By the thickness of the accent I could tell they were genuine Midwesterners. Having grow up in Wisconsin I could tell they were fellow Sconnies.

“Yeah, are you guys?” I replied to the well-served couple clearly on their way to a good beer buzz. “Get these boys a beer on me,” exclaimed the smiling man as he extended his hand to me. He continued, “I am Mike Reil and this is Linda Jung. We are instructors for the festival this weekend at the Porkies. You are in the right place. Mount Bohemia is just right up the street. Join us for a beer and relax. You’re here!”

As the beers began to flow into our bottomless glasses, Joey and I soon realized we had found what we were looking for and we’d also found the kind of people we’d hoped we would. We crashed at Mike and Linda’s home that night, skied Mount Bohemia the next few days, and then had a blast enjoying the festival at the Porkies resort that weekend.

Fast-forward a few years to fall of 2013. At that point I had gone to a number of the festivals, usually bringing along my Dad, some cousins and friends from my Wisconsin hometown. All seemed on track for another great year of Midwest Telefest until I came across the following message on the festival blog: “After too many Telefests to remember, Downwind Sports has decided to take this winter off. We will not be organizing the event this year.  We’ve had a lot of fun and we’d like to thank all of the great participants that attended over the years.”

I was heart broken. I had missed the previous year’s festival. I was really disappointed it would be no longer. By then I had become good friends with Mike and Linda whom we’d found in that dark local tavern down the street from Mount Bohemia all those years ago. Joey and I had become friends with another fun crew from nearby Duluth as well as all the other genuine, down-to-earth folks from all over the Midwest. I had even added most of them as friends on my Facebook account. That’s when I started seeing pictures of everyone together at the Porkies resort that winter — I was in shock. I quickly typed away, inquiring as to what was going on because I thought the festival was cancelled. As replies trickled in from these friends, I was so pleased to find out that although the festival was indeed cancelled, they all decided to get together at the Porkies that weekend anyway. I was so excited. Honestly, I was more stoked about this impromptu gathering than I’d been about the festival itself in prior years.

I wrote on one of the Facebook threads, “This is the coolest thing I have ever seen! You are all the best!” I was smiling ear to ear as I typed. I quickly got in touch with Joey because I knew we had to go back again next year; we needed to see all our friends and join this movement to keep the festivities going despite the lack of an official festival host or sponsor. I knew then this festival was about these people, these friendships and our deep love for this sport.

In the past, the Duluth crew had a tradition of going to nearby Mount Bohemia for a few days during the week before the festival at the Porkies. We were in on it this year.

As Joey and I arrived late at night in Mount Bohemia, once again I wondered if our friends would be hanging out in the North Pole Bar, the only well-lit yurt in the base area that time of night. When we walked in to shouts and taunts directed at us from Anthony, our Duluth friend, I knew we were in for another classic Midwest Telefest weekend. We skied with the crew over the next few days and when we rolled into the Porkies resort in Ontonagon, Michigan that weekend, the scene was devoid of shiny new gear displays. No stage was set up in the corner of the A-framed open room where the typical festival band played in years prior. The scene was really quite tame but the room was still full of telemark skiers, plenty of familiar faces too. There was no race, no clinics, no band posters, but plenty of stoked telemark skiers laughing and carrying on just like they always had. Also, as always, they greeted Joey, my family and friends, and me with open arms.

As we reveled in the company and conversation, a tall, longhaired and bearded Sconnie approached us. He introduced himself as Keith. As opposed to nearly everyone else in the room, Keith Opperman and I had never met, but by then I knew he was the man behind the movement keeping this gathering alive. In talking with Keith, he explained, “I did not want to see this great festival die. I grew up going to it back when Scott Berry, from Life Tools, ran the show. As a tele-kid back then, I thought it was awesome! There were leather boots, big beards, and everybody camped. It was always full of the greatest people too. It was simply about bringing pinheads together. We’d all talk about gear, style, telemark form and quite simply just have a great time with a lot of people we only got to see once or twice a year.”

When I asked Opperman about that first year Downwind Sports decided not to host the festival he told me, “I found out through the grapevine that it was cancelled, but I had been planning on taking my eleven-year old son and his friend camping for the weekend since the last ski season. So we showed up anyway! There were also a bunch of pinheads from Michigan, Wisconsin and Minnesota that showed up as well, and we all decided that we don’t need a corporate sponsor. We could do it ourselves. Fast forward then to the following September and I started to make calls to make sure it would happen. There was a lot of talk from a lot of people, but no real action. Then come December, myself and a pinhead from the U.P. of Michigan, Matt Manders, decided to take it on together. Over the next two months we got Scott from the Porkies management to show full support. From that point on, we all agreed we wanted this to be our Midwest Telefest.”

My friend, Linda Jung, from that dark bar meeting all those years ago chimed in, “The original festivals sprang from a granola-gang of backcountry diehards looking for a good excuse to party in the woods. The humble grassroots beginning of this gathering has always been about the quintessential elegance of the telemark turn with a wild Porcupine Mountains backdrop. So now we continue that pilgrimage. We’re back to its purest form again, and it is the purest joy!” 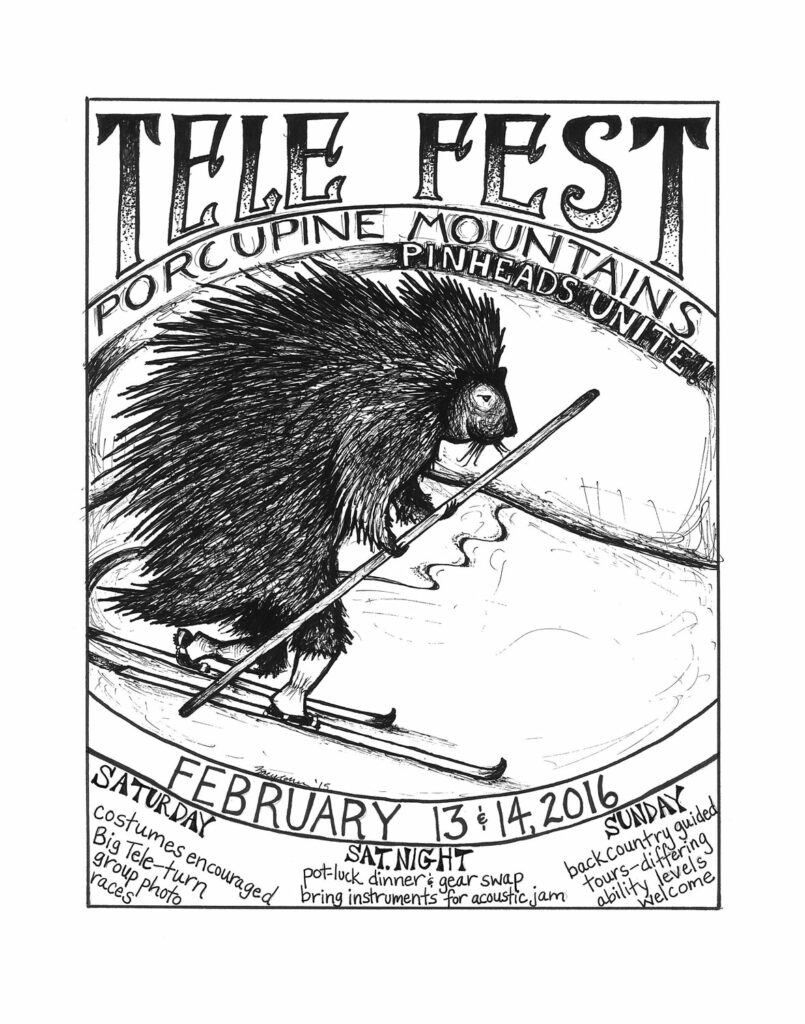 As I walked back and pulled another round of cold beers from my Dad’s cooler, I stopped and looked around the crowd of jubilant telemark skiers. I realized although there was no festival marketing campaign drumming up interest, no gear shelves or rentals donning the perimeter of the room, no shop owner glad-handing potential customers, and no schedule laid out for events, there indeed was still something present from all the festivals in the past — all the familiar faces, smiles, and laughs of the same overjoyed telemark skiers.

Maybe I knew it all along but as I passed out those cold beers to my family and friends, interrupting another of ole’ Dean’s classic stories, I knew for certain that all we really ever had, ever will have, and really will ever need…is each other. We have this telemark community and it is still the best community on snow, which really is one of the coolest things I have ever seen.