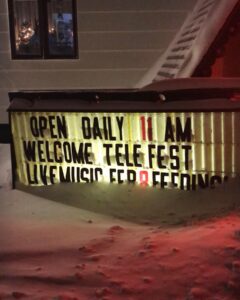 telemark community in the northern Midwest of the United States.

“It is the best fest in the Midwest!” said event organizer, Keith Opperman. “The 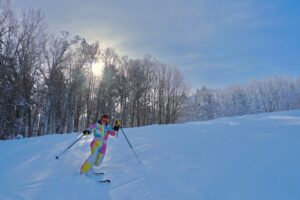 Porkies has good terrain for all ages and abilities and focuses on making it a family friendly event. For over 29 years the festival has worked with different management and Gogebic Community College, the current Porkies manager, has been the best so far.”

The festival organized a wide variety of activities over the weekend; it started Friday with skiing all day followed by dinner and the opening party at Two Loons in Silver City. Live music from the band Feeding Leroy kept people moving during the après hours. Saturday kicked off with an uphill downhill race, tele mob ski, human tele slalom, group photo, chili cook-off, potluck dinner, and an evening of fellowship with awards.

Linda Jung and John Rutherford won the uphill downhill race, and Mitchel Kreps captured the top spot in the chili cook-off. The Sondre Norheim Award, which exemplifies the mountain spirit and a valuable contribution to the festival, went to long-time Midwest Telefester and all-around global telemark ambassador, J.T. Robinson. 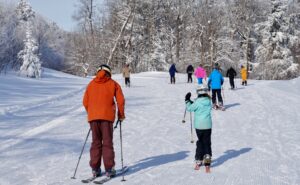 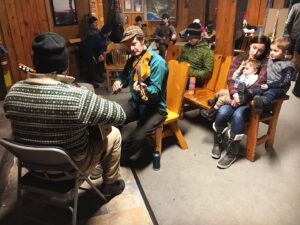 The night played out by fireside as Telefesters broke out the bluegrass instruments, filling the base area lodge with music and laughter well into the night. The festival wrapped up Sunday morning with guided backcountry tours into the Porcupine Mountains’ hardwood forests. The tours trekked up to the western radio tower above the resort, then skied down through the woods filled with lake-effect powder from Lake Superior.

“I brought my entire family up this year,” said J.T. Robinson. “My wife, mother, and two-year old enjoyed the cross-country trails while my dad, cousins, five-year 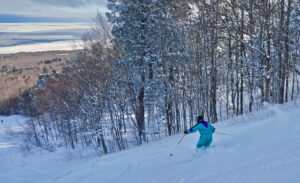 old, and I took ski runs in the resort. My kids drank hot chocolate and danced the night away to the live music. All the Telefesters and 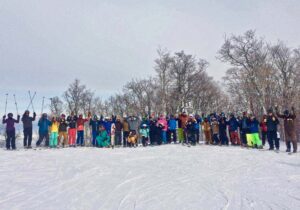 other kids were so great with my youngsters; it was a real joy to share this festival with them.”

Midwest Telefest happens every year in early February at Porcupine Mountains State Park and the 30th annual event next year is being planned to be the best yet.