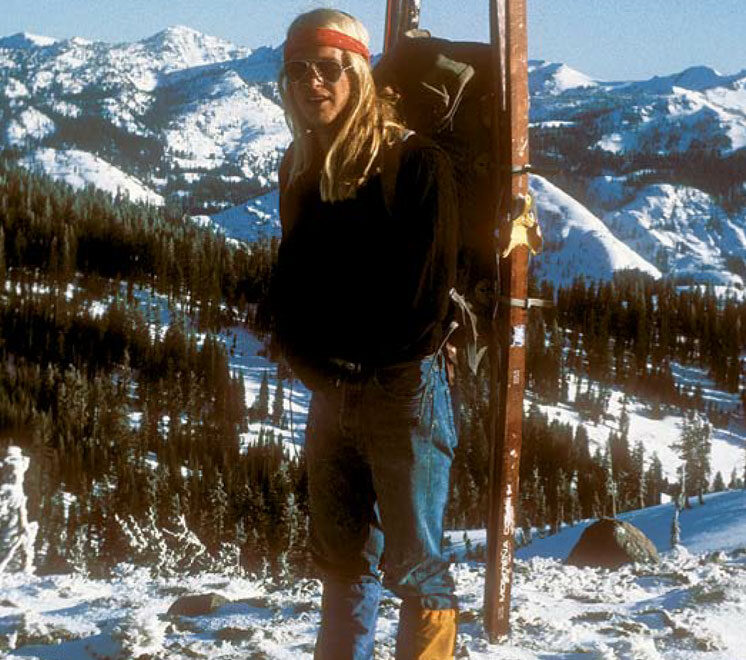 LIFTING THE SPORT: AN INSIDE LOOK AT TELEMARKER NILS LARSEN

Nils Larsen’s last official title for defunct telemark ski company Karhu was “Minister of Ski Culture.” While his business card might have caused chuckles, it sums up his contributions to both the manufacturer and sport of telemarking.

From producing some of the earliest telemark-specific movies ever—including Beyond the Groomed, Freedom of the Heels, and Big Mountain, Little Skier—to hosting instructional clinics and spending 19 years building the Karhu brand into a telltale symbol of telemarking, Larsen’s contributions to the sport are second, perhaps, only to Mother Nature’s. And they extend far beyond what he’s brought to the silver screen.

“I love to teach,” says Larsen, 56, of Curlew, Washington. At one point he was the lead PSIA telemark examiner in the entire Northwest. “It’s a very rewarding thing to do.”

If it’s rewarding for him, it’s even more so for his students. “He has a low-key, laid-back, unintimidating style that makes him an especially effective instructor,” says author, product designer and fellow teacher Paul Parker. “It reflects the balance in his personality— extremely competent, yet relaxed and unassuming.”

While he has touched people through his clinics, he’s also done so through products. After running the backcountry store Highland Nordic in Curlew, WA for six years, he jumped to Karhu in 1988 and never looked back. “It was my favorite backcountry brand,” he says, adding that he handled everything from marketing to product development. He holds a special place in his heart for the company’s Jak BC and XCD lines for their light weight and quickness, and in the case of the XCD, its ability “to blur the boundaries between up and down.”

After running into tough times, the rights to the Karhu ski line were sold to K2 in 2005, with the company dropping the line in favor of its other backcountry offerings in 2008. “I don’t think K2 ever really understood the Karhu DNA,” says Larsen. “It had a strong niche, but it wasn’t necessarily a big one, and they didn’t quite know how to handle it.”

By then, however, Larsen already had his hands full working on his fourth film. In 2005, he ventured to the Altai Mountains of Northwest China with proven travel partners Dave Waag and Naheed Henderson (who had been to the region before) to document the centuries-old use of skis in Skiing in the Shadow of Genghis Khan. “The formula for ski movies seems a bit stale,” he says. “I guess I’m a bit jaded about what I want to see.”

But he’s also accepted that there is a new breed of freeheeler bucking conventional norms. “As I started skiing with some of these younger guys in films, I realized that some of them can ski the pants off any PSIA skier,” he says. “It caused me to revisit what good skiing was and broaden my views.”

Gear, a lot of which he helped develop, plays a big part in this. “When you look at gear now, it’s almost like there’s an artificial separation between telemarking and other disciplines,” he says. “It’s more about your abilities than what kind of gear you’re on.”

He feels that new technology like NTN blurs the lines even more. “I like to joke that it’s a plot launched by alpine companies to get rid of telemarking altogether,” he says. Still, ever the freeheel fan and loving life in the hamlet of Curlew, he’s always eyeing a new line, both on the mountain and in life. And for him, both of these are now more frequently coming in the backcountry. “If you look at the entire ski category, all the growth is in backcountry now,” he says. “And there’s a reason for that.”

Future projects include continuing his instructional offerings—this summer he conducted several clinics at Mt. Hood—as well as several “undisclosed” new product developments that he’s keeping close to his avalanche harness. While he’s not planning to produce any more mainstream telemark flicks (he’s happy leaving that to the likes of PowderWhores), he is continuing his documentation of routes in the Altai and skiing’s origins. After winning the film award from the International Ski History Association for In the Shadow, he returned last year to capture more high-definition footage and is entertaining a sequel as well as a book.

The rest of us, meanwhile, should look back uphill and appreciate the tracks he laid. While we’re lifting our heels, we can thank Larsen, Minister of Ski Culture, for moving the sport along.

*This originally appeared in TS#15