Most of us are familiar with Shane McConkey’s game of G.N.A.R., but never before has there been an adaptation for telemark skiers. Telemark Colorado is looking to change that. Telemark Colorado presents King of the Heel, an annual telemark video competition. Everyone is welcome to play and the official rules will be released on New Year’s Day, 2020.

Teams of up to five telemarkers will join forces to complete challenges worth points from the provided task booklet. The goal is to complete the task, film it, and produce an edit. “The challenges will vary from directly telemark specific, like switch tele a bump run or tele press a rail, to general non-tele shenanigans, such as eating 10 McDonald’s sausage biscuits on the drive to the mountain or telling somebody you tele in the bathroom,” CJ Coccia of Telemark Colorado explains. With a large selection of challenges, anyone can participate, from seasoned telemark professionals to ‘aprés heroes.’

The challenge booklet will be posted on Telemark Colorado’s websites. Teams will have two months to complete the challenges and produce an edit. March 1, 2020 is the deadline after which each submission will be judged.

The team with the most documented points will be crowned with the 2020 title of King of the Heel. A Best Edit category, based on public votes by the telemark community, will also be determined. Other prizes will be given to those winning one of several Biggest, Longest challenges, as well as other sponsor specific challenges. Stay tuned for more information and details, to be found in the official rule booklet on Jan. 1, 2020.

Start the new decade off right by doing something for yourself, your team, and your telemark family! 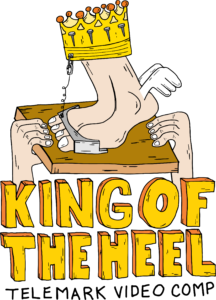 8 thoughts on “King of the Heel: Telemark Annual Video Competition”