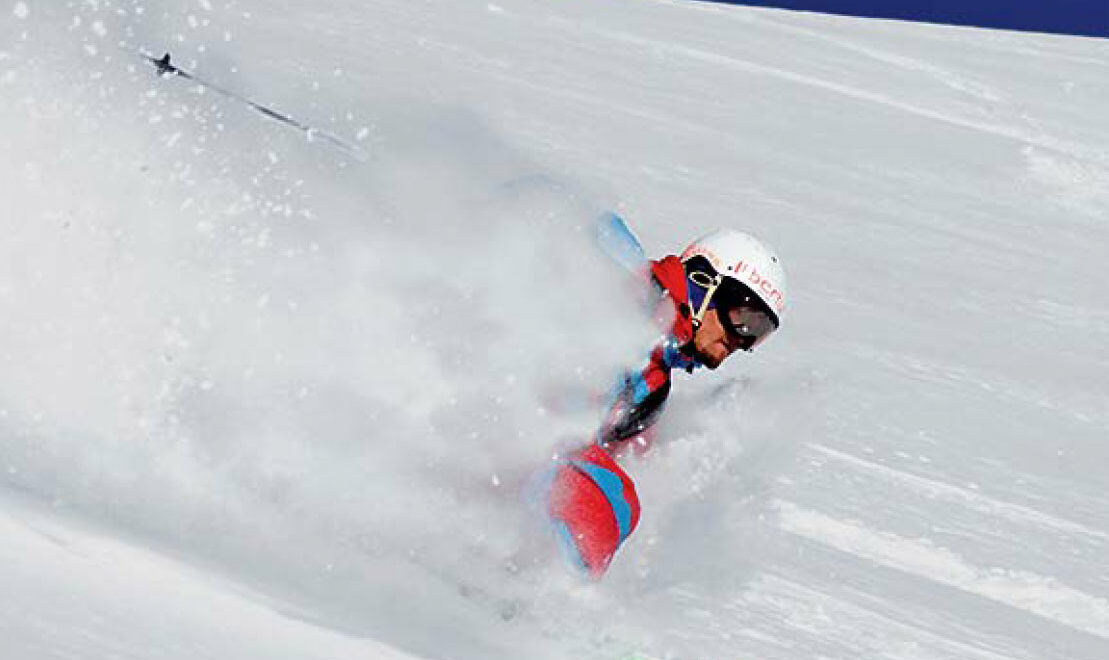 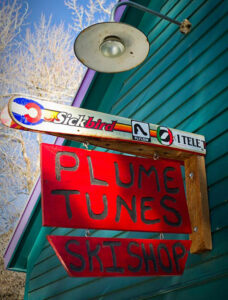 Getting away without really leaving…

“It’s the one at the end of the street with red and gold trucks parked out front.” My first reaction to what Eben Mond told me was that there was no way I was going to be able to see the aforementioned trucks. Silver Plume, Colorado struck me as the darkest place I had ever been, and I couldn’t even tell if I was on the right street. After making my way down Main St. — a name used quite liberally in this instance — I eventually found the place. It wasn’t anything like I was expecting.

Silver Plume, to put it quite frankly, has seen better days. A former silver mining camp, the town has a bunch of boarded up buildings and there doesn’t seem to be a lot going on. But Eben’s place doesn’t match that aesthetic at all. The first thing I saw when I pulled up was a Rossignol Sickbird sticking out of the garage that held up a sign reading ‘Plume Tunes.’ Up the property past the garage, a beautiful house with massive windows illuminated the darkness and revealed a guesthouse out front.

Eben greeted us and took us up towards the house. “I’m just finishing up down here. Come on in, and watch your head,” he said. We walked into the basement from the front and into Eben’s own ski shop, Plume Tunes. Red tape indicated the low-hanging hazards to one’s cranium. The shop was like a living timeline. The walls and shelves were lined with just about every Rossignol ski and every kind of telemark binding from the last 10 years. Peppered throughout the space were photographs and posters of Eben to go along with a good variety of other skiing paraphernalia. If you haven’t heard of Eben Mond, you’ve either been living under a rock or you just started telemark skiing — he has been an influential figure working for several companies as both a sponsored telemark athlete and a gear tester for years. 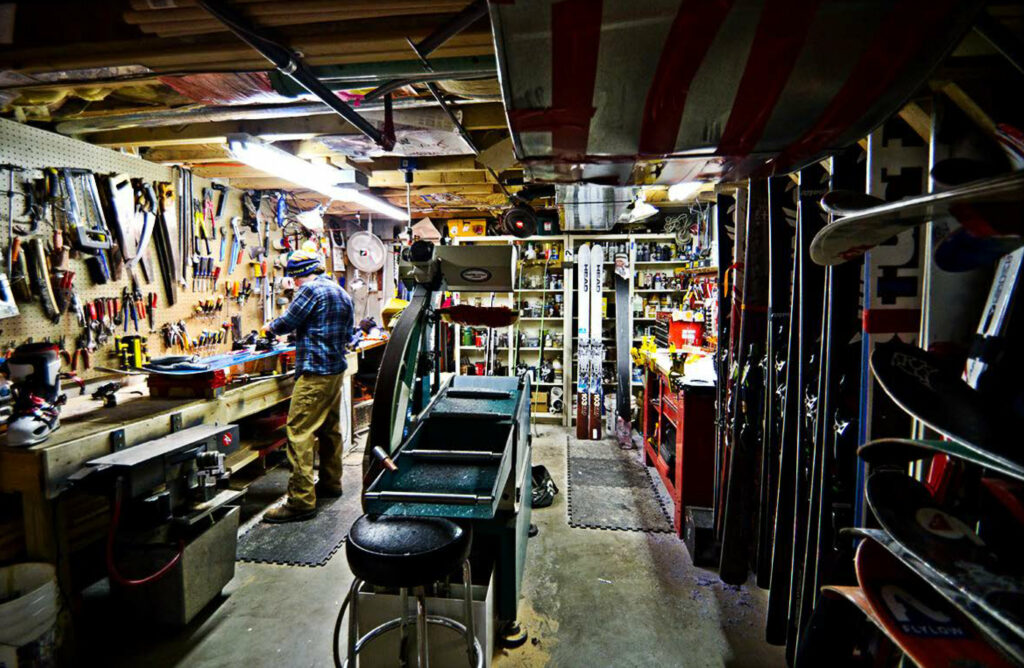 The shop was like a living timeline. The walls and shelves were lined with just about every Rossignol ski and every kind of telemark binding from the last 10 years.

The smell of sawdust and a rendition of Cracker’s ‘Low’ by Leftover Salmon filled the air. Eben handed us a couple beers from one of the two fridges in the shop and showed us around. “I sold my sled to buy this base grinder,” he admitted. “But this was my best purchase. It’s a 1988 dial caliper I bought at an auction.” I noticed there weren’t any mounting jigs, and Eben informed us he learned to mount skis while working at Banzai Spoke n’ Ski in Iowa — the state Eben hails from. “We didn’t have any jigs so we had to learn how to freemount skis.” The caliper and drill press in the shop seemed to suit Eben’s needs
just fine; he is a fine technician with those tools.

After Eben finished tuning the skis in his shop, he took us over to the guesthouse where he and his wife Darcie run a bed and breakfast. The B&B is an eccentric old house filled with antique furniture and decorative items. It is so completely unexpected to see a place like that right in the middle of Silver Plume, but Eben and Darcie have done an incredible job of offering a uniquely desirable lodging experience right where they live. They really achieve the goal of allowing other people an opportunity to experience, if only for a short time, the intricate and intimate way of life in Silver Plume.

We turned in fairly early that night. Our time in Colorado was limited, and we were going skiing at Jones Pass with a cat-skiing operation called Powder Addiction the next morning. After an early season marred by minimal snowfall and persistently high avalanche danger, we were chomping at the bit to get some good skiing in. We awoke early the next morning to blue skies, and it quickly became apparent why Eben had chosen to plant some roots in Silver Plume. Just a short drive from Loveland Pass Ski Area — where Eben, a man of many trades, works as a freeride coach — the town is nestled tightly into the Rockies. The dramatic peaks seemed to rise right from the tops of the houses. “Just across the street,” Eben informed us, “you can skin up the mountain bike switchbacks and ski a couple of thousand vert.” Not too bad for your own backyard.

But skinning wasn’t on our agenda that morning. We were going to get some cat rides that day; it would be the first time for each of us. We got to the parking area just in time to hear the familiar diesel growl and see the cat come ambling down to meet the group. We were joined by one of Colorado’s nicest guys, all-around telemark shredder Christopher Ewart. Some Stephen Marley reggae blared from the speakers as we finished our beacon check and loaded into the back of the cat. Everyone seemed anxious to get out and rip some powder since it had been a really dry season in most of the United States up to that point. In fact, it had been so dry the Powder Addiction crew had yet to take any clients up that year until we showed up. The guides were sure to do a bit of ‘research’ a couple of days earlier to make sure they could get us out safely. 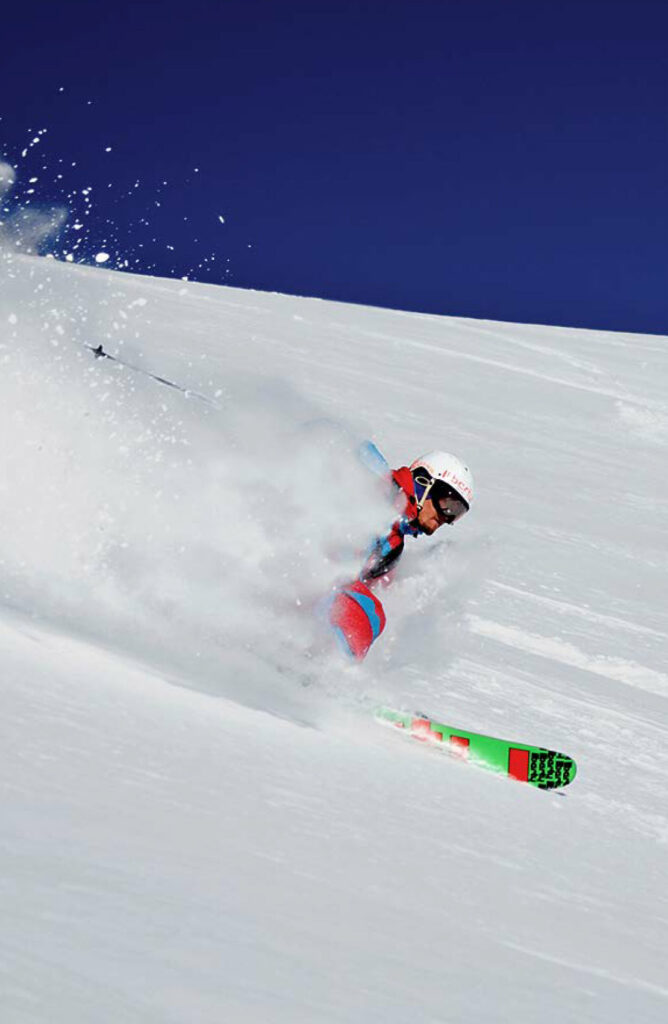 The guides were sure to do a bit of ‘research’ a couple of days earlier to make sure they could get us out safely.

The lead guide, Jamie Wolter, gave us the safety rundown as we meandered up the cat roads among the peaks of Jones Pass. Though the persistent avalanche risk was still present, Jamie alleviated our worries of skiing unfamiliar terrain by assuring us he had never buried a client in an avalanche before, and he didn’t intend to start doing so on that particular day. Located right on the Continental Divide, the terrain accessed by Powder Addiction offers a great mixture of everything from gnarly steeps on wind-scoured, bald peaks to deep-fluff powder gluttony in the meadows that lie below. Any worries we had about snow quality were quickly alleviated as soon as we saw Ewart drop into the first chute and lay a big slash in some nice wind-buffed powder. A couple of turns in, he aired off of a spine, and it was all faceshots from there on. Shouts of stoke bellowed from our lungs as each of us blew up some powder turns; high fives and pole claps echoed from the group gathered at the bottom. For many of us, these were the best turns of the season so far — by a long shot.

By the time the group got to the bottom, the cat was already waiting for us. We loaded back up, and I marveled at how amazing it was to ski backcountry lines and deep powder without having to hike up. It felt like one of those times when you stay in a hotel room that is clearly much too nice for you — nobody needs to be treated that well, but it sure feels good; what did I do to deserve this? Back at the top, and a couple of Jah-approved reggae songs later, we dropped into nearly 2,000 vertical feet of powder. Lap after lap went by just like that. The guides set left and right boundaries for the skiers, but Powder Addiction has access to so much terrain that there is no need to spoon and farm turns, so you could ski wherever you wanted to — it was an all out powder assault.

If you haven’t been cat skiing before, you should really try to go at least once. It felt like we were living it up in the lap of luxury. Everything was provided for us: new powder skis to shred on, a delicious lunch, endless rides to the top, good company and more than our fair share of powder turns for a day. The amount of vertical we skied with such minimal effort was astonishing. Needless to say, it was an amazing reprieve from skiing park and moguls like we had been doing all year.

At the end of the day, all of our legs were pretty cooked. We skied down the cat road all the way back to the parking lot and right up to our cars. It was one of the easiest exits I have ever had in the backcountry — even easier to get back to the car than it is at most resorts I have been to. The Powder Addiction staff already had cold beers waiting for us. More than one person alluded to the fact this day would be hard to top all year, but it was just another day for the folks at Powder Addiction. Suffice it to say, their jobs don’t suck and they showed us a pretty great time.

After the parking lot celebration wound down, we headed back down the road to Eben’s place and had some pizza and beers while he mounted up a few pairs of skis. Occasionally, someone would pop in to hang out and drop off some skis to get mounted or tuned. Eben’s shop is really the only game in town, and the intimate nature of the community is quite enviable. Getting to stay at such a comfortable place after a rewarding, but exhausting day was a nice relief. We had to be up early to get to Denver in the morning, but that is part of what made the experience so amazing. We were barely over an hour from Denver, but we had spent the last two days feeling like we were hundreds of miles away from anything. Skiing backcountry powder in solitude with our friends, while staying at a place that feels like it’s in another world, means you don’t feel at all like you are in the I-70 corridor.

Sometimes it feels like we have to travel half a world away to get the experience we are looking for. Going to Clear Creek County showed us you can see some incredible things and meet some wonderful people right under your nose. We all want to get away, but it’s important to tick off some places right near home first; there are hidden gems just around the corner. When people talk about Colorado, Summit County gets all the press. But after visiting I can assure you, Clear Creek County is not to be missed, and it won’t disappoint.