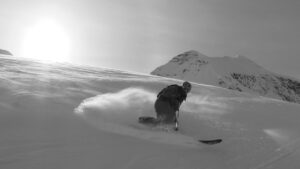 Owner. Designer. Bishop Binding Co. The man who created the BMF-R and BMF-3. Having skied since the spry age of five, it makes sense Dave Bombard found his calling in owning a binding company. A native of the East Coast, Bombard became familiar with the hard icy snow of Ward Hill, MA, first wedging and then arcing his way down the hill as his skiing progressed. The first telemark turn he ever made was in high school, when he would go cross country skiing around the Wachusett reservoir with his dad. There were a lot of face plants involved with those leather boots, super skinny double camber skis and three pin bindings. After graduating from the Massachusetts Institute of Technology with a degree in engineering and master’s in product design, Bombard was called to the West. It was here Bombard was first introduced to the loves of his life: the telemark turn and another ski bum who would become his wife. “I was introduced to a more modern telemark turn the season of 1995-96, when I was ski instructing at Breckenridge,” Bombard said. “It was something we did as a clinic to try this sport that was gaining some traction and to improve our alpine skiing.”

A 10-year stint in San Francisco allowed Bombard to explore the Sierra. Starting in the late 90’s he found a solid group of skiers and rented a cabin in Tahoe every winter. “Scott Kellar and Matthias Schabel first got me into telemark as a way to get into the backcountry,” Bombard recalled. “They hooked me up with a pair of leather lace-up Asolo Snowfield boots, Tua skis, and a basic no cable, three pin clamp binding. The first set up I ever bought was in 1999 with my friend Rob Stone, a pair of brand new Fischer Telepathics on sale at REI, used T1 boots, and Rottefella 412 bindings.” After California, Bombard found his way back to the Rocky Mountains, settling down in the Vail Valley to raise his family.

“I still vividly remember the powder day run down the ’58 and Hidden Gully at Sugar Bowl when [telemark] clicked and I was in a flow state, ripping along as fast as most alpine skiers,” said Bombard. “When I moved to the Vail Valley in 2008, I joined up with the ‘Vail Players Club,’ a tongue in cheek name for a great group of local, fun loving, knee dropping folks who knew how to play on the mountains; ripping around, wearing costumes, and living the mountain town lifestyle.”

Bomber Industries, as Bishop Binding Co. was formerly known, was the brainchild of Fin Doyle, established in 2001. Doyle was the original inventor of Bishop’s unique sliding plate system, but stopped making bindings in 2006 to go back to his main focus of making hard-boot snowboard bindings. Bombard decided to adopt Bishop Industries from Doyle a few years later and released the Bishop 2.0 binding under his own company, Bishop Binding Co. Bombard kept the name for its recognition and bomber reputation in the tele community. “People still call them Bombers and that’s just fine with me, plus it’s pretty close to my last name,” Bombard laughed.

The Bishop factory is located in Eagle Valley just minutes from Bombard’s home, allowing him to combine his business and design experience to promote and advance the art of telemark skiing. This season has seen the addition of new athletes, new bindings, and new skis to Bishop’s arsenal. The BMF-3 and BMF-R bindings, according to Bombard, have over 3,000 hours of product design and development in them, five years in the making. Most of those 3,000 hours are thanks to Peter Van Dyke and Erik Warmenhoven. “We are pushing the technology of telemark bindings in terms of durability, flexibility and ease of use. We were very deliberate in the design of the BMF line to include both 75mm and NTN boots by going to the back heel of the boot. This way skiers can switch between NTN and 75mm boots, so people with 75mm boots don’t have to buy new boots to enjoy the ease and performance of these bindings. We also worked very hard to create an easy and intuitive step in/step out with a ski brake to make telemark more desirable for the everyday skier who has been stepping in and out of bindings without a leash for over 60 years.”

And as far as athletes go, their ‘Badassador’ team wins the best name game. A marketing consultant came up with the name working off Bombard’s tagline for the company, ‘Big. Burly. Badassery.’ Everyone laughed, but really it was a perfect fit for the brand; badass, but still playful and fun loving. The addition of Christopher Ewart to the marketing and athlete program has proved a solid move. Ewart has already overhauled the program and started to show just how much Bishop has influenced and continues to influence the tele tribe.

You can catch Bombard this season ripping around Colorado resorts as well as Grand Targhee for the Freeheel Life Cup. Look for his trademark orange pants as he wiggle turns on his Chedi skis, BMF-3’s under his feet. 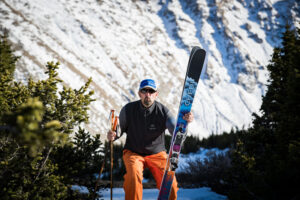