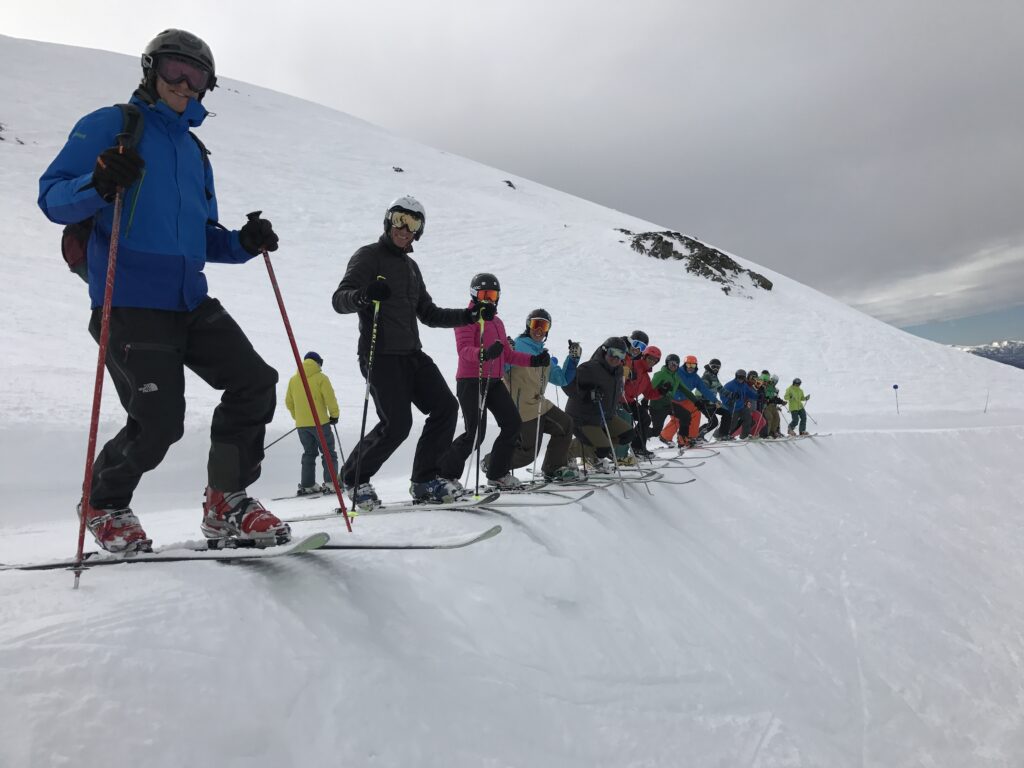 During the weekend of September 9th and 10th, 2017 Catedral Alta Patagonia hosted the 3rd annual Patagonia Telemark Festival. Partners of the event included: Catedral Alta Patagonia, AADIDES – ISES, Punta Princesa Restaurant, La Bolsa del Deporte, and Magellanica Trips. The event had 25 participants and according to event organizer Diego Allolio, “It was a great success! We were able to bring our vision to life by combining both festival and instructional elements together with both foreign and local telemark professionals!”

The weekend of telemark skiing was built around an exciting three-year partnership between AADIDES – ISES (Asociación Argentina de Instructores de Esquí y Snowboard) and PSIA (Professional Ski Instructors of America – Rocky Mountain Division) to bring tele instruction to Patagonia. Instructors had the opportunity to clinic and test for a PSIA level 1, 2 and 3 telemark instruction certification during the week of events outside of the festival, which was primarily freeskiing as a group around the 1,480 skiable acres of beautiful terrain.

Catedral Alta Patagonia is located just outside of the beautiful city of Bariloche, Argentina with a base of 3379ft and summit of 7152ft. It’s season generally runs from early June until early October. It’s easily accessible being only 30 kilometres (19 miles) from Bariloche Airport, approximately a 30-minute drive.

Telemark skiing is relatively new and unknown to the area as well. “Bariloche and Patagonia are the perfect venue for a telemark event,” said Allolio. “My hope is to see this event become the hub for telemark and South America. A place where we can welcome our telemark family from around the world.”

Gear can be difficult to come by and rentals are non-existent. That makes this event that much more important to people in the area — seeking to share the turn with their friends and neighbors. During the weekend event, people brought extra gear to outfit those that did not have their own so they could participate in the festivities.

Plans to continue the event in 2018 are already underway with a similar time frame being considered for next year’s incarnation. Event organizer Diego Allolio finished things off by saying, “It used to be that we would have to travel to another country to experience this type of gathering. Now we can stay here and continue to build upon these past few events and that feels like a great accomplishment!”