Bevan Waite, the front-runner of van life in the telemark world, past recipient of the Sick Bird award and 5th place finisher at the Freeheel Life Cup, with an Instagram account to match his addiction to the white fluffy stuff, is paving the way for a new generation of telemark skiers. His skiing is something anyone can look up to and he is constantly putting new footage out for everyone to enjoy.

Growing up, getting to the mountains was no easy task. Originally from Los Gatos, California, his family would make the trek to ski various resorts throughout Waite’s childhood. It wasn’t until high school that Waite got his first season pass to Bear Valley. At age three he was given his first pair of skis and by age 12 he was going so fast that his dad decided it was time to learn the art of telemarking, if only so the little ripper would slow down. “It worked for a couple years,” Waite laughed.

Waite’s skiing style can best be described as big mountain, with a love for powder, steep lines, and jumping off rocks. Often that also includes backcountry skiing and ski mountaineering to allow access to the steep lines that remain untracked and new cliffs that invite him in. Waite will occasionally make a lap through the park but, “I’m not the best park skier. I often find myself catching an edge on beginner rails and boxes and over rotating 360’s,” he says.

This past winter season was a big one for travel. Waite had the opportunity to travel with fellow freeheeler, Ty Dayberry, to Niseko, Japan. Once there they filmed this sweet powder segment. On the road to the Freeheel Life Cup at Grand Targhee, Waite and the van took a three week road trip across the west from his current home town of Tahoe, to Nevada, Utah, Wyoming, Idaho, back to Jackson Hole, and then home to Tahoe. “I am now penniless, so I think I’ll be staying at home for the remainder of the season. Especially since Squaw Valley is finally getting good.” 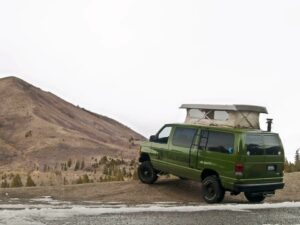 When asked about what van life is all about, he chuckled and said, “It involves a lot of sleeping around.” It’s also his ride to his architecture office, a.k.a., his real job. You may have seen photos, even videos, featuring his van. A lot of this video footage actually comes from the man himself. He started video editing in college and has always enjoyed making short films. For Waite, part of the motivation to make ski edits and longer, more polished ski movies stems from the lack of modern telemark content being created. “ It’s a niche, and not many people nowadays are getting together to create something tangible and of high enough quality to promote the sport to the larger public. The fact of the matter is, without high quality content being shared throughout outdoor communities, the sport has little momentum to grow.  In addition to that, when I was a kid I always wanted to be a part of a Powderwhore movie, but since they’re not around anymore I’ve started to create that reality for myself.” And to those who say telemark skiing is dead, his only reply is, “Hey, watch this!” And watch we will, Bevan. 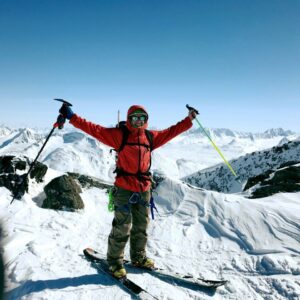