August ‘Guschti’ Poltera and his Telebuddy products were born out of passion and a desire to solve an issue. Telemark has always thrived because of its colorful community and the ingenuity that they bring to the table, and Guschti is a prime example of that.

Chur, Switzerland is the capital of the Graubünden canton in eastern Switzerland. Guschti was born here to a Swiss father and Tirolian Italian mother in 1962 and grew up skiing at Brambrüesch, the local ski mountian. “I remember I loved the freedom of going alone from the city to the cable car which goes directly out of the city up to around 2100 m.a.s.l.,” said Guschti. “It was because of this that it was always possible to go skiing!”

About 20 years ago, Guschti tried telemark for the first time after having been a licensed ski and snowboard instructor in the late eighties and early nineties. It was through an ex-World Champion from Germany named Robby Brackendorfer and his friend that Guschti would be able to borrow some telemark skis and get his first shot at making tele turns while in Chamonix. He loved it and the rest is history.

Since the mid-1990’s Guschti mainly focused on a business in tourism. He first rented a hotel in Flims, Switzerland and changed it into one of the first hostels in their area. He explained, “The snowboard scene during this time helped a lot to promote another style of accommodation than the more traditional hotel business.” It was at this point he began a side business of renting telemark skis and boots out of the hostel because the local rental shop wasn’t having much success with it. He saw this as a chance to open a specialty shop in the area, one that could introduce telemark and other products to the area. 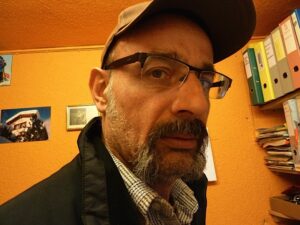 As the telemark rental business grew so did Guschti’s ideas. He and his good friend Jürg, who was also a telemarker, were big fans of the Bomber Bishop when it first came out and skied it all the time. But when Bomber Industries stopped production of the binding, that’s when the wheels really got turning. “When Bishop stopped production of the bindings, we felt lost. So after drinking some beers and a little Bob Marley music we got to the idea of changing the bindings on our skis to use as we want without damaging the skis.” The Telebuddy was born.

The early prototypes were created by a friend of Gustchi’s who worked with a CNC machine at work. He would build the Telebuddy plates during his lunchtime. By 2009 he’d moved production to a mechanical plant in Austria. He then decided to move to Laax which was better for his hostel business and had a better facility, a bar and more space for the telemark rental business.

The Telebuddy plate is now available in two versions, 75 mm and NTN/lowtech. The development of NTN combined with low tech ideas of small producers like The M-Equipment and others led to the additional version. The Telebuddy plates are sold and shipped to all parts of the world.

Guschti has been renting out his hostel business for the past two years and enjoys spending his summers biking in Enduro and Downhill parks while waiting for the snow to fall so he can telemark ski again. He’s excited to travel around Europe more and continue to promote telemark and the products he is making.