If there is a great place to have a telemark binding company it is in Driggs, ID. The little town of around 1,700 people is nestled just below the Tetons and Grand Targhee Resort in Alta, WY. I stopped into the 22 Designs office next to the Driggs Airport the other day to sit down with Chris Valiante and Collins Pringle. They are the masterminds behind arguably some of the best telemark bindings in the last decade. They created their company when they took over Rainey Designs along with the Hammerhead binding in the early 2000s and went on to create the AXL, Vice and now Outlaw bindings.

They opened up about what changes are coming to their new Outlaw binding for the 2016-17 season and alluded to some new R&D projects that are in the works!

Telemark Skier: You released the first version of the Outlaw NTN binding this past season. Are there any changes or adjustments people can expect to see when they get a pair this season?

22D: Yes. We beefed up the bends on the toe piece with more material to reinforce that. We’ve tested them on our binding machine here and on some tele skiers late season. They are holding up extremely well. We’ll also changed the outline shape of the flex plates and made them thinner so they flex better and are stronger against hairline cracking.

Telemark Skier: Did you feel like overall customers were happy with the new binding? Especially the die hard 22D fans?

22D: Besides the flex plates and some of the cracks on some of the toe pieces we felt like people were very happy. People really liked the way that they skied and our pre-orders are up for the Outlaw so that’s great! One other thing that we are changing are the cams (step-in feature). Originally the cams were different for small and large. This year they will be the same size and shape for both sizes. We’ve made the distance a little bigger to make the step-in process easier, especially on the small. There will now be a laser engraving on the top flex plate to identify the size of the binding.

Telemark Skier: Have you had any resistance from customers that only want a 75mm binding and aren’t happy with the move towards NTN?

22D: No not really because we are still selling the AXL and Vice. We’ll hear of people that just got new 75mm boots and they just aren’t quite ready to have to make the switch quite yet. Most just ask why NTN? I think it is more about educating more people about the NTN system and getting them on it. 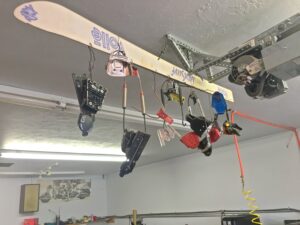 Telemark Skier: Do you think 75mm will phase out eventually? And if it does how long do you think it is going to take?

22D: Good question…awhile. A lot of it we believe we’ll just have to wait and see where things go and what people want. Five years? Ten Years? I’m not quite sure. It could be that in 30 years you can still buy a 75mm setup but it may morph into something that is just for a lightweight setup for meadow skipping and that sort of thing.

Telemark Skier: That brings me to something I think many people may be wondering about the Hammerhead (HH) binding that was so popular. Are you continuing to make new parts for that binding?

22D: We made some HH cables three years ago because we ran out, but that is really it. People moaned a bit when we discontinued the HH but really when the AXL came out everyone was happy to have a tour mode and great binding all in one. We still have most of the parts still in stock for those that are looking for them but once they are gone that will be it.

Telemark Skier: So that is what is interesting about the HH. It is still a relevant and great binding for people to use from what we can tell from people that we see on the hill.

22D: For us the Vice is less expensive to make though and really it is a more durable binding, so it makes more sense for us to move onto a better product and then do our best to service the crowd with the remaining HH parts until they are gone. And we are happy to do that! Really when you think about it we haven’t sold the HH binding in four or five years.

Telemark Skier: The latest changes and innovations we have seen in the last few years is the movement from some companies to create tech toe bindings. What are your thoughts on these types of bindings?

22D: It seems like the next step. It reminds us of when we had the HH binding and realized that the next step would be to have a free-pivot binding for touring. We realize that there are people out there that are hoping to keep up with their AT friends on the skin track and a tech toe may be a good option. We’re not sure yet if that little bit of weight you’ll lose in that type of design would be the answer or not yet? We’ll have to see. There is a demand for sure though.

The one thing we have noticed in trying a tech toe is that you do lose the weight in the design of course, but when it comes to the stride on the skin track it is hard for us to tell much of a difference against using an Outlaw binding. The tour point on the Outlaw even tours better than the AXL in terms of stride.

Telemark Skier: Do you guys think that the telemark boot companies need to begin evolving their boots in a new direction then?

22D: Yeah definitely the boots could improve a little for light touring setups. The AT boots can go to the extreme with some of the race-style ones and we don’t think we might need to go that far. There is no reason though that a telemark boot can’t have that same articulation and motion built into the cuff more like those boots. A lighter boot would be great not only for a tech toe binding but an Outlaw too in terms of uphill travel, but we’re not sure if they can get much better for downhill performance. They are already so good at that.

Telemark Skier: So do you have any new bindings on the horizon in the next year or two? Do you want to get into the tech toe game?

22D: Yes definitely. We have a couple designs we are working on right now. So we are testing those right now and starting to refine the ideas. In the next year or two we should have more refined bindings to get out on the snow and start testing them thoroughly. That is one thing we have learned with our beta tests with other bindings is that we really want to take our time and dial things in. If we do decide to do a beta program it will probably be smaller since it would most likely be a smaller group of people seeking these types of bindings out. Also the costs are probably be higher to produce.

Telemark Skier: Along the lines of R&D and new bindings and features, do you think that you would ever add a release to the Outlaw or future bindings?

22D: We think that with release what do you actually call it? Other bindings don’t really have a DIN certified release either…and even with the Outlaw it is already somewhat releasable. For instance in the beta version of the Outlaw they actually would release a bit too easily. We did add some material to the 2nd heel area to make it release less often but still have had some reports of people releasing during a big spill. Forward you really don’t need a release because that motion is built in, so to speak, with the free heel. So really side release and backwards release can potentially happen already depending on the circumstances of the fall but we are making no promises of release currently with the Outlaw binding.

Telemark Skier: So you have tested the release of your bindings and others and haven’t really seen it work too well?

22D: We’ve played around with our bindings and a few other manufacturers bindings and really haven’t seen the results to make it seem like the release is based on a single standardized system across the board. Really if you go back to the old TRP plates (old Rottefella technology) that is probably the best way to do a release system but then the binding comes off on your foot.

Telemark Skier: We know tele skiers love to get out on the snow with the latest and greatest gear. Do you have any demo events planned for the upcoming season?

Telemark Skier: Don’t you also have a program where people passing through this area or locals can bring in some beer and trade it in for a demo setup?

22D: We always have full boot, skis/binding setups to take out for some beer!

Big thanks goes out to everyone at Twenty Two Designs for taking the time to sit down with us and talk things over. Along with all of the exciting news they shared with us they will also be launching a new and improved website for the upcoming season along with a newly mailing list that customers can sign up for. Be sure to keep checking back with them at www.twentytwodesigns.com